Trump Issues Easter Statement of Rage and Resentment About Election

Former President Donald Trump kicked off Easter morning in an odd way, by wishing everyone a "Happy Easter ” - but then adding “including the Radical Left CRAZIES who rigged our Presidential Election, and want to destroy our Country!”

Oh no! Sounds like the poor little fella needs his diaper changed - he's crying again. Guess this means that the Trumps won’t be attending church this Easter, unless it’s the Church of the Eighteen Holes. The truth is, Trump’s spent more time in Stormy Daniels than he ever has inside a church.

But gee, I always thought Easter was supposed to be about how Christ died and was resurrected to “forgive all of our sins.” On the other hand, Trump never “forgives” anybody for anything - especially people who voted against him. Why, to hear to him tell it, you’d think it was Donald Trump - who was the one hanging up there on that cross.

On the other hand, I can’t really blame him for being a wee-bit pissed off about Easter. Word has it that when he tried to pet the Easter Bunny - the Easter Bunny bit him. That made Trump hopping mad! One thing’s for sure, Republicans made a big mistake putting all their Easter eggs in Trump’s basket. Fact is, Trump’s not a very good loser - he’s just a loser. 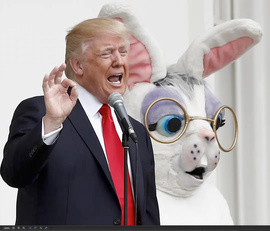 love your take on things

Thanks for your kind words Glenn!