The New York Times reports that Rep. Matt Gaetz (R-Fla.) sought a blanket pre-emptive pardon from the White House during the final weeks of President Trump’s administration, a revelation that comes as the lawmaker finds himself the subject of a federal sex-trafficking investigation.

Oh, now I see how it all came down - “Mr. President, I did absolutely nothing wrong, and I’m gonna need a complete, blanket pardon to confirm that!” Gee, sounds like Mr, Gaetz didn’t come up with all that cash Trump demands for his pardons. Now, I don’t like to spread rumors, but it sounds like Republicans may very well be running a child prostitution ring - out of a pizza parlor. Word has it that the operation is being called “PizzaGaetz.” 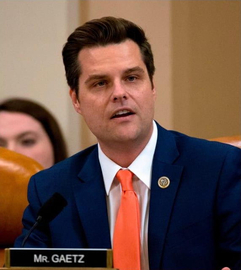 I do so enjoy your way with words!

Why thank you kindly!

You are brilliant, as usual!

Thanks for your kind words!

Figures he knew he was looking at prison and a hard time, pun intended