Those following the bankruptcy case of the National Rifle Association (NRA), know that the hearing has already produced scores of embarrassing revelations about lavish spending, such as providing chief executive Wayne LaPierre with a 108-foot luxury yacht and a brand new $6.5 million mansion for his “personal security” after the Parkland, Florida killings. Now, it’s also been disclosed that a law firm sent NRA Secretary and General Counsel John Frazer's office a mysterious invoice in 2020 for $59,155.25 - which was simply labeled as “Russia.”

Gee whiz, so if I’m understanding all this correctly, NRA CEO Wayne LaPierre is basically saying that “the only way to stop a bad guy with a gun, is by providing a millionaire NRA executive with a huge mansion and a 108-foot luxury yacht.” Interesting concept! Now, I’m not sure that makes a whole lot of sense, but then again - I’ve never been all that good with math.

That said, who knew LaPierre was living in so much fear after he mockingly dismissed those Parkland families, that he needed to move onto a luxury yacht as well as a huge mansion - just to ensure his safety? I mean, what a damn shame no one ever bothered to give him the number of one of those “good guys with a gun,” who could have protected him.

Now, if Wayne LaPierre really was under such threats, you’d assume he might have had a little sympathy for what parents of those murdered children were going through when NRA members were threatening them for simply demanding an end to this senseless gun violence. Of course, given that it’s Wayne LaPierre and the NRA - I seriously doubt it. 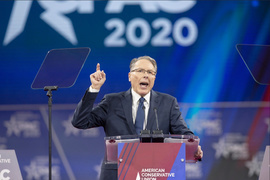 I hope they throw the book at the blood soaked bastards

Despicable hypocrite and flimflam man. Who still contributes to that scam?

Posted by mistymoon77This topic has been floating around for quite some time now.

Posted by johnnyrobishGOP Lawmaker Vetoes Suicide Education Bill Over Teaching of Evolution Wyoming has always had either the highest, or nearly the highest suicide rate in the country, so HB 62 was introduced to ...

Posted by glennlabIt amazes me that hunters, with no formal training are required to identify a bird flying at up to 50 mph and can be fined $ thousands for a mistake, Yet LEOs can't identify a taser at 2 feet and ...