Conservative Calls for Gun Subsidies to Protect Citizens From BLM

Appearing on the ultra-conservative One America News Network (OAN), right-wing activist Rogan O’Handley - also known as “DC Draino” - praised gun ownership and bragged that “there are now more guns than people in this country,” adding “God bless the 2nd Amendment!” O’Handley then insisted we should have subsidies in this country for citizens to buy more guns to protect themselves from the "looting, violence and murder” of Black Lives Matter (BLM) and Antifa.

OK, so let me get this straight. Government-subsidized guns which foster more political hate and violence are perfectly fine, but government-subsidized healthcare to protect American families from financial disaster should a healthcare emergency occur is purely evil - because that’s socialism? Have to say, that makes perfect sense - assuming you’re a completely insane psychopath.

Now, as far as “protecting citizens against BLM and Antifa - if memory serves me correct, I’m pretty sure that it wasn’t BLM or Antifa who stormed our nation’s capital January 6th, trying to overturn a democratic election, while threatening political assassinations, beating and killing police, as well as looting and trashing the Capitol Building like rabid animals.

So, these are the folks that Mr. O’Handley believes need gun subsidies? Now, gee whiz and gosh - I wonder if Mr. O’Handley is advocating subsidizing guns for all citizens of all races, or just for white citizens? Somehow, I seem to get the impression that he wasn’t quite thinking of people of color - when he implied that we urgently need to make sure that “everyone is well-armed.”

Bottom line, O’Handley says what people like him need are more and more guns for their “safety.” Well, Mr. O’Handley - I beg to differ with you. I suspect most people would say it isn’t more guns you folks need. What you people really need - is to talk to a competent mental health professional on a regular basis, and to remember to take those meds prescribed by your doctor. Do that, and we’ll all be in a safer place. 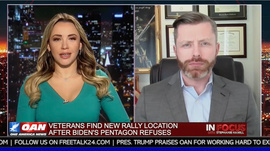 Maybe we can get O'Handley to drink that "DC Draino", hell, he obviously drank the Kool-Aid!