Appearing on the ultra-right One America News Network (OAN), Arizona GOP Chairwoman Kelli Ward this week threatened her own party’s officials with arrest if they refused to comply with the Trump-backed audit of the 2020 Arizona election. Meanwhile, GOP officials critical of Ward and other Trump sycophants - claim the audit and associated conspiracy theories, such as looking for “Chinese bamboo fibers in ballots” and rumors of “Maricopa County election officials shredding Trump ballots, feeding them to chickens, and then incinerating the chickens,” make the party look absolutely ridiculous.

In response, Trump loyalists claimed they were able to find a few survivors of this chicken massacre, and these brave chickens not only confirmed the election fraud, but also reported that “the ballots tasted quite a lot like rattlesnake.” In addition, a few of the brave chickens who managed to survive, also told eager Trumpers and QAnon followers about the horrors they incurred at the hands of the Democrat Party and Chinese Communists, as these villains systematically tried to incinerate all the chickens - simply because they “knew too damn much.”

Wow, now I’m certainly no food critic, but all this chicken talk, makes me think that perhaps these ballots may have actually been “finger-lick’n good.” I can just hear those damn election fraudsters now - asking “and would you like fries with those ballots?” Hell, wonder if any of this could help explain that mysterious shortage of “Chick-fil-A sauce” that Fox News recently did an investigative report about - a shortage which Fox “journalists” concluded was likely a direct result of “Biden’s America.”

Anyway, I need to get one thing straight in my mind before I lay all this to rest. So, we have tens of thousands of election ballots from Donald Trump voters that were fed to the chickens by renegade Republicans. Chickens who then had to be burned in an incinerator, in order to hide all the evidence. OK, got it! Now, my question is, why not just throw all the ballots directly into an incinerator - and skip the damn chickens? I mean, who the hell needs a middleman, or middlechicken anyway?

Besides, I thought that Trump and company’s primary complaint about this past election, was supposed to be centered around the “corrupt” electronic voting machines. Not to sound overly skeptical here, but how the hell do you feed someone’s electronic vote - to a goddamn chicken? I tell ya, either life is full of inexplicable mysteries, or this is all just a bunch of chickensh*t. 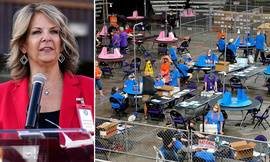 I've never encountered a group as intellectually impaired as tRumpists.

I have never been able to get chickens to eat paper, but I suppose the bamboo would help.