The Ultra right-wing One America News network recently aired a political commentary by Pearson Sharp this past week which was so far out there, that even conservative Fox News host Howard Kurtz had to call “foul.” In his editorial rant, Sharp called for the mass executions of tens of thousands of American poll workers - based on the claim that widespread voter fraud in the 2020 election amounted to a “coup” against former President Donald Trump. Sharp further reminded viewers that “In the past, America had a very good solution for dealing with such traitors - Execution!”

Gee whiz, now when Fox News suddenly becomes the voice of reason, I think we’re all in really deep do-do. Of course, if one were to read between the lines, what Fox News is really saying to OAN is “Hey, what the hell are you guys trying to pull over there, anyway? Pushing lies and hate is our job - and this, is bordering on “trademark infringement. Why, talk like that is totally unacceptable - that is, unless it’s coming from Tucker Carlson, Sean Hannity, Jeanine Pirro, or Laura Ingraham.” Now, is it just me, or does this whole incident sound a lot like Nazis, calling out fascists - for telling lies?

Anyway, while “freedom of speech” is protected by the 1st Amendment, somehow I don’t think calling for the “mass execution of tens of thousands of poll workers simply because your candidate lost” - was exactly what the founding fathers had in mind here. In addition, while the OAN commentator may be named “Sharp,” many of his viewers frankly aren’t all that “sharp,” and might actually decide to carry out these executions themselves. Now, not to be critical, but supporters of the January 6th insurrectionists like Pearson Sharp, who’ve been calling for “executing traitors” - might wanna be just a wee-bit careful about what they’re wishing for. 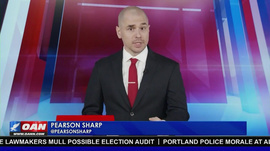 Becuz if you announce you are going to use violence, and then do so, it is PREMEDITATED, duuuuhhhh.

This is a new level of "You can't make this shit up!"

OAN needs to do a little background checking. All poll workers are officially government officials while they are performing their duties, to conspire to harm them could be charged as sedition.

Talk like this will get innocent people killed. I hope the FBI will be visiting this asshole to put a little fear in him!

May he meet his end like the coward he is..whimpering and bawling..