We rely on members to let us know when posts contain content that violiate the community guidelines. The most common reason that content gets flagged is that it contains dehumanizing or trolling/baiting text. Getting too many flagged posts will result in account termination.
Visit Group Join Group
4 10

A forthcoming book by Wall Street Journal reporter Michael Bender, claims former President Donald Trump "stunned" his then chief-of-staff John Kelly, by praising Adolf Hitler during a European visit to mark the 100th anniversary of the end of World War I. This occurred after Kelly had finished explaining to the President “which countries were on which side during the conflict" and "connected the dots from the First World War to the Second World War and all of Hitler's atrocities,” to which Trump replied "Well, Hitler did a lot of good things.” Kelly then tried to explain to the President that “its never a good idea to praise Hitler for anything.”

So, John Kelly is claiming he was “stunned" when Donald Trump praised Hitler - and I get that. I mean, who could have possibly imagined that a guy like Donald Trump, who constantly heaped praise on tyrants like Vladimir Putin, Kim Jong-un, Philippine President Duterte, and Saudi Prince Mohammed bin Salman - would also be a fan of Adolf Hitler? Why, anyone who’d believe that, would probably also believe the horrific 117 degree heat wave that recently hit Portland - was caused by climate change.

Anyway, what a comfort it is to realize we just had a sitting President these past four years - who actually needed to be told “it’s probably not such a good idea to praise Hitler.” Why, even Sarah Palin knew that. Of course, some might argue that if John Kelly had any integrity at all - he’d have resigned right there. Well, the fact is, Kelly didn’t necessarily disagree with the President, he was just warning him not to say that kind of thing “out loud.” Besides, don’t go blaming John Kelly or those other Trump officials. After all, they were “just following orders.”

The thing is, we now know that Trump’s admiration for Adolf Hitler apparently isn’t anything especially new. According to to Ivana Trump’s memoir and their divorce proceeding’s records, Trump reportedly kept a book of Hitler's speeches right on their bedside table during their marriage. Of course, knowing Trump - it was probably one of those special “Mein Kampf for Dummies” editions. You know, lots of pictures - not too many big words. Nothing too complicated - after all, a fascist mind is a terrible thing to confuse. 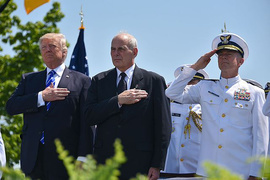 Trump's father, Fred Trump is believed to have associated with the Klan, so sympathies with Nazis is not a stretch.

On Memorial Day 1927, brawls erupted in New York led by sympathizers of the Italian fascist movement and the Ku Klux Klan. In the fascist brawl, which took place in the Bronx, two Italian men were killed by anti-fascists. In Queens, 1,000 white-robed Klansmen marched through the Jamaica neighborhood, eventually spurring an all-out brawl in which seven men were arrested.

One of those arrested was Fred Trump of 175-24 Devonshire Rd. in Jamaica.

And, his use of "The Big Lie" is right out of the Hitler playbook!

& in a way, tRump praising Hitler isn't even the really salient point here, & certainly not surprising. It was that the Orange turd, with a supposedly decent education & being half-conscious over the previous 70 yrs of his life, needed a whole rundown on the history of WWI & WWII & a breakdown on the "players". We're not talking here about needing info on particular present-day leaders or movers to keep up with shifting geo-politics, no, this was info that any high-school kid should have down pat. Let alone countless movies, documentaries, passing references,...
The ignorance & general indifference to the world outside of himself just underscores his narcissism & megalomania. He brags so often about how well he did on his "cognitive test", I wonder, after his "update" by Kelly, how well he'd remember now any of that? I'm guessing not much, & what little he did remember he'd mix-up!

"The ignorance & general indifference to the world outside of himself...," narcissism & are symptoms of his sickness.