The Sacramento Bee reports that Jarrod Copeland, one of the two men arrested for plotting to bomb the office of the California Democratic Party, was denied pre-trial release at the very last minute, when his wife hesitated about having to commit to serve as her husband’s legal custodian, which meant monitoring that all the terms of his release are being honored. Her hesitation in the matter occurred shortly after being informed by the court she could be jailed if she failed to report any violations - to which she responded “Yeah, that’s a big responsibility,” and then suggested the court find someone else to be his custodian.

Wow, along with a criminal defense lawyer, sounds like Mr. Copeland’s probably gonna need a divorce lawyer too. Now, I’m certainly no marriage counselor, but I believe if I were Mrs. Copeland, I think I’d take that old passage from those marriage vows "Till Death Do Us Part” - very, very, seriously.

And frankly, I think she has a pretty decent chance of winning in a divorce court if she were to go that route, given the fact that I’m pretty certain “monitoring a terrorist bombing suspect” is not mentioned anywhere in traditional wedding vows.

Of course, if she doesn’t ask for a divorce, you can bet it’s gonna be rather awkward at the Copeland residence during the Thanksgiving holiday. I mean, just how comfortable can you feel, when dinner guests ask questions like “Is it just me, or does this dip smell a wee-bit like plastic explosives?” 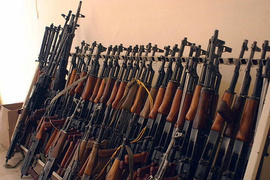 Good for her because the nature of the crime should be great enough to not be letting people loose and have their spouse be the one who has the custody of them. WTF is wrong with California?

That tells me all I need to know about Jarrod Copeland: asshole, misogynist, irrational, self-seeking, irresponsible, dangerous, murderous, and unfit to be in a long term relationship with anybody else, either man or woman.

Good for her! What judge in right mind releases a terrorist to a family member’s custody?? Obviously the subject is not controllable or he wouldn’t be building bombs or plotting murder.

Posted by JonnaBononnaIf this isn't spot on!! I thought about this when they were protesting the treatment of those locked up for their participation in the Capitol riot- i thought those people were antifa and blm?

Posted by glennlabWith the controversy over the women's beach handball team, and gymnastics, this seem appropriate.

Posted by johnnyrobishAnti-Vaxxer Arrested After Threatening to Beat, Kill, and Lynch Dr.

Posted by phxbillcee(Just SMH at the hypocrisy of it all...) Woman runner's outfit deemed too revealing while female team fined for NOT revealing enough [dailykos.com]

Posted by johnnyrobishFox News Hosts Discuss Prohibiting Childless People From Voting On their weekend show, Fox & Friends hosts Will Cain, Pete Hegseth, and Rachel Campos-Duffy promoted an idea which has is being ...

Posted by SeaGreenEyezCOVID-19: Arkansas Healthcare Worker Says She Has $1m in Medical Bills

Posted by phxbillceeThis is what conservative opponents of critical race theory don't want you to know [rawstory.com]

Posted by johnnyrobishA blast from the past

Posted by WilliamCharles TOMORROW "I will fight for people I do not know."

Posted by johnnyrobishCalif Democratic Headquarters Bomb Plotter’s Wife Refuses Responsibility for His Release The Sacramento Bee reports that Jarrod Copeland, one of the two men arrested for plotting to bomb the ...

Posted by OldGoat43 Republicans Have Taken a Brave Stand in Defense of Tax Cheats Rob Portman, the GOP senator from Ohio, announced that the bipartisan infrastructure package that lawmakers have been haggling over for ...