MyPillow CEO Mike Lindell says he will be pulling all his ads from Fox News, after Fox declined to run a commercial linked to his efforts to promote claims of widespread fraud in the 2020 presidential election. MyPillow is considered among Fox News’ major advertisers, spending nearly $50 million on ads there last year alone.

Good grief, you mean Mike Lindell is back in the news again? Apparently, Lindell’s “traveling shitshow” never sleeps. Maybe one of his pillows might help with that? Now, I’m certainly no legal analyst, but it sure sounds a lot like Fox may just be trying to avoid getting into one of those nasty MyLawsuits.

That said, it sure seems like poor Fox News has been losing advertisers faster than Red State meth users are losing their teeth. Hell, after MyPillow pulls all their ads, about the only sponsors Fox will have left - will be products like Preparation H, Life Alert, home catheter delivery, and erectile dysfunction ads.

Now, just like Mike Lindell, I’d sure hate to spread unsubstantiated conspiracy theories around, but if I were a card-carrying QAnon member, I think I’d look into whether the untimely death of ultra-conservative Supreme Court Justice Antonin Scalia, may have been the result of being smothered to death - by one of Mike’s pillows.

Of course, just like all of Mike’s election fraud allegations, there’s absolutely no evidence whatsoever that anything like that ever occurred, but what harm would it be to look into it anyway? Which makes me wonder, is it just me, or does it seem like Mike Lindell was doing far less damage back in the good old days - when he was just a crackhead, and not a millionaire? 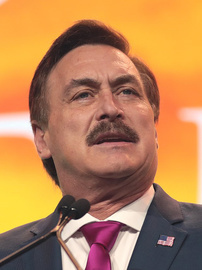 ED ads would be a boon for F***er Carlson, who has his own line of ED cures. A fool, I once knew, ordered the kit and received a bunch of herbs!
Lindell seems to have caught Trump's need for publicity and vengeance. Dumb shit!

May he be sued into oblivion

Pulling his ads because no money...nobody is buying his stupid (same exact thing $5 at Walmart) chunks of foam pillows, they are featured at Job Lot now, Job Lot got a hella deal on truckloads of them. Too bad, sooooo sad...,

According to qman, August 13th, a Friday, the tRump is going to be reinstated.

I think he is back on his crack as well.

@Beowulfsfriend yeah, he looks ragged around the edges, for sure

Yeah, it is crazy he's been spending so much of his own money and effort on something so completely insane. And he knows Trump has been shinning him on of late, so there's that.