Rather than participate like other presidents in ceremonies around the 20th anniversary of the 9-11 terrorist attacks, former President Donald Trump instead chose to give the keynote speech at a “Unification Church” conference (aka the Moonie cult), heaping praise on Hak Ja Han Moon, widow of Reverend Sun Myung Moon - the cult’s founder. The “Moonie cult” is known for its extreme right-wing politics, appreciation of AR-15 assault rifles, ownership of the conservative Washington Times newspaper, and its mass weddings of thousands of couples - all selected and paired together by the Unification Church.

Good grief! Forgive me for getting so emotional, but it kind of warms the heart to witness two very prominent cult leaders, praising each other like this. Why, the Moonies even sent a whole contingent of folks to President Trump’s Jan 6th insurrection and coup attempt at the US Capitol earlier this year. Talk about “feeling the love!”

And, to be completely honest, you have to give the guy credit. Donald Trump is the kind of guy who is willing to pay tribute to some of the great cult leaders who came before him. You know, folks like Jim Jones, David Koresh, Marshall Applewhite of the Heaven’s Gate Cult, and the Rev. Sun Myung Moon.

Fun Fact: all these cult leaders appear to have even had product endorsement deals - Jim Jones (Grape Kool-Aid), David Koresh (Gun Manufacturers), Marshall Applewhite of Heaven’s Gate (Nike sneakers), and the Moonies (AR-15s). Now, as for the mass weddings - well, I’m sure the Scientologists are like, “now, why the hell didn’t didn't we think of that?”

Anyway, so now Trump’s doing commentary for a bogus pay-per-view fight, and a keynote speech for the Moonie cult? Gee, it’s almost as if he’s really desperate for cash. How long can it be before “Trump Holy Water“ hits the market? You Laugh? Then just ask yourself, how often can you save your soul and quench your thirst - all at the same time? Just let that set in for a minute! 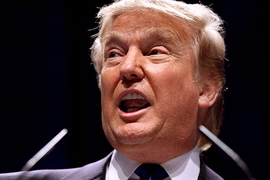 @Barjoe posted about this, and my comment was, "how much did he get paid?" The Buck stops here, and not in a good way.

Anything for a buck. Interesting to note how the right wing news and the evangelicals seem to be ignoring his praise for a guy who claimed GeeZeus personally named him a messiah as well.