We rely on members to let us know when posts contain content that violiate the community guidelines. The most common reason that content gets flagged is that it contains dehumanizing or trolling/baiting text. Getting too many flagged posts will result in account termination.
Visit Group Join Group
7 11

After Nicki Minaj announced she hasn’t gotten the COVID vaccine because her cousin’s friend in Trinidad’s testicles became so swollen - that his fiancé left him. Now, after hearing that story, Fox News host and anti-vaccine crusader Tucker Carlson, tried to make contact with Nicki Minaj’s cousin’s friend during his show by announcing “We haven’t been able to figure out if this show is broadcast in Trinidad, but if Nicki Minaj’s cousin’s friend is watching, or his former fiancé is watching, we want to hear your story.  We’ll come to the Port of Spain to see you.”

Oh, I get where Tucker’s coming from. Why, this swollen testicle story could mean really huge ratings for Tucker - just as long as those testicles remain “fair and balanced.” That said, I’m not so sure having a guy display his swollen testicles on cable TV is such a good idea. I mean, that sounds like a pretty good way to send many of Tucker’s geriatric audience - directly into full cardiac arrest.

Besides, I’m fully vaccinated and never got anything like Nicki Minaj’s cousin’s friend’s “swollen balls.” That said, and in all fairness, several weeks after receiving my last COVID shot, I did get bitten right on the ankle by an angry aardvark - so there’s that. Not to mention, I have a good friend who hasn’t even had a period since getting vaccinated. All I can say is, thank goodness my friend is a man - or I’d be pretty darn concerned. 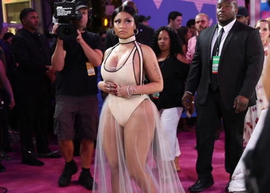 Well, then, perhaps showing that video is JUST what Fucker C. ought to do.

Yet another waste of human flesh…..

Minaj has made a fool of herself expounding on about " doing her research " before getting vaxxed. Now this idiocy..hell even Joy Reid called her out on it..

Anything for publicity. "It doesn't matter what they are saying, as long as they are talking about you."

Since he has none not surprised

Posted by johnnyrobishTrump Had to Be Blocked From Appointing Ivanka to Head Up World Bank The Intercept’s Ryan Grim and Max Ufberg say two sources told them that Donald Trump sought to appoint his daughter Ivanka to ...

Posted by phxbillceeJim Acosta to Andrew Yang: What the Hell Were You Doing on ‘Tucker Carlson’? [thedailybeast.com]