After the ultra-conservative journal “AM Greatness” reported that "multiple sources” have confirmed an ongoing extramarital affair between Republican South Dakota Governor Kristi Noem and former Donald Trump campaign manager Corey Lewandowski, Gov. Noem is labeling the story as “disgusting,” and claiming this is nothing but more “old, tired attacks on conservative women.”

Gee, it’s kind of interesting how Gov. Noem feels these rumors represent “attacks on conservative women.” Especially, when you consider this story actually broke over at “AM Greatness,” a site considered to be one of the most “ultra-conservative” news journals around. But sure, Gov. Noem wants us all to know that the rumors linking her and Lewandowski are “disgusting.” I get that.

Anyway, perhaps one thing we can all be in agreement with her is, the mere “thought” of someone having sex with Corey Lewandowski - is truly “disgusting.” That said, there is one thing actually missing in her denial statement, and that is “I did not have sexual relations with that man - Mr. Lewandowski!” Now, I have no idea whether or not these rumors are true, but if they are, then my only wish would be - “please don't let them reproduce.”

In addition, it turns out that Mr. Lewandowski is also finding himself in even more hot water, after it was revealed that a prominent Trump donor named “Trashelle Odom,” has just accused him of making unwanted sexual advances and touching her inappropriately at a charity event this past weekend in Las Vegas.

Now, putting all that aside for just a moment, I must confess that I was feeling rather proud of myself for not taking the low road and making a joke about this Trump donor’s first name being “Trashelle.” Of course, if I were to be completely honest with all of you - in my heart, I now fully understand - that I have sinned. 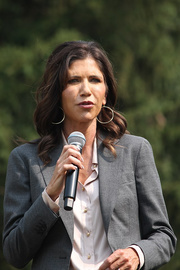 I'm just spitballing here, how about - she wants this story out to avoid and deflect her illegal activities with her kid; evangelical voters are notorious for "forgiveness" of same sex relationships.

The party of family values, always.

Lies, bigotry, doublethink and double standards are all the stock-in-trade for those oxygen thieves.