The Daily Mail is reporting that married Trump donor Trashelle Odom told police she feared for her safety at a Las Vegas Republican fundraiser, after former Trump campaign manager and longtime advisor Corey Lewandowski stalked and repeatedly touched her, while telling her that when he was 10, he “stabbed someone over and over again, killing him,” and when he was older, he “stabbed a man in the back of the head, also killing him.”

Wow, is it just me, or does this guy have a really unusual take on how to impress the ladies? Now, we all know that Corey Lewandowski has a long history of being a real “hothead,” but I seriously have my doubts that confessing to two murders is an especially effective way to try and make a female companion feel “hot.” Hello, is there anyone still out there in the Republican Party, who’s not a criminal?

Anyway, putting this Trashelle Odom incident aside for just a moment, one would think a seasoned political pro like Corey Lewandowski would know that talking about murdering people, is not gonna impress your typical Republican donor in 2021. At least, not unless you also mention that after committing the murders, you then mutilated the bodies.

Of course, I’m sure Lewandowski’s people are gonna claim he was just drunk and “shooting off his mouth.” Just shooting off his mouth? I doubt it! Now, my guess is that Lewandowski kills roughly 250 people every single month - on average. Not surprisingly, a Trump spokesperson denied the former guy was ever close to Lewandowski, and that Trump only kept him around as a “guard dog.” 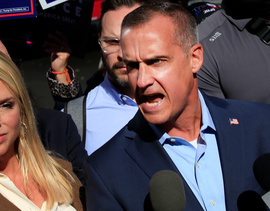 He is a total scumbag - believe he has sexually harassed women, and with that said, I doubt that lying scumbag murdered anyone, at least with his bare hands - paying someone I would believe. Oh, I do believe he would tell a woman he had killed someone; that isn't surprising.

Such Fine People for friends & associates drump chooses.....and then it's "who?" when their actual nature becomes known......

Just lock his ass up