Sad that this can even happen! 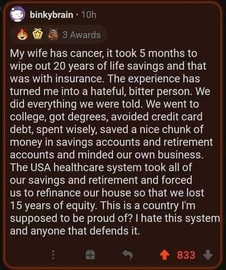 our Candian healthcare system is far from perfect but we don't have ppl bankrupted bc of a catastrophic illness.
in the last 9 yrs i have had a prostatectomy a fractured hip which eventually required a hip replacement,which works great, & just got a date for cataract surgery. also treated for Atrial fibrilation & had numerous basal cell cancer tumours removed. some of my meds are expensive but our fairly inexpensive insurance covers at least 80% of them.
i had the misfortune of 1st hand experience with the immoral, greedy, for profit US healthcare system. i was kept overnight bc of my A fib which they didn't even treat. the bill came to 14,000. my travel insurance eventually settled it for around 8000.
i've never understood how or why the American ppl have been conned into accepting a healthcare sytem which is designed to greatly benefit the rich at the expense of the rest of the population.
i guess it comes down to the success of the oligarchs & their MSM flunkies of convincing the general population that anything, including healthcare, which is not designed to extract the most profit must be socialism which many equate with communism.
sad, really sad.

This has happened to millions of Americans, most of them show up as homeless people. I had a retirement plan, had money saved, the recession in 1999 took most of it, the rest was taken by a bad financial decision I made not knowing the ins and outs of leasing a car. I have worked since 1973, Kate worked since she was 13 and worked up until the recession of 2007 when the republicans stalled the economy and there were no jobs to be had. Unfortunately, she waited four years until she tried to get disability, she was disabled before this time, but being one of the men she did not think of stopping to work. When it came time for Social Security it was calculated on the fact that she had not worked for four years and so she gets the minimum. Fortunately, the only bill we have is for health insurance and I make sure it pays for everything, so the premiums are higher but we do not have to pay out of pocket for showing up at the doctor, we do have to pay for medications.
I love what I do, being a custom woodworker is fun and I am always doing something different. Hopefully we will slide through and be able to keep our house, if not we become homeless with a job. That will be fun.

Sad but true for millions of Americans.

If i take my car to a mechanic and he doesnt fix it... Guess what?... He doesnt get paid.... Same applies here 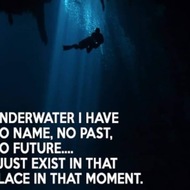 But in some states, there is a mechanics lean, where he can keep your car until you either pay or he sells it to pay the bill.

What's more is that cannabinoids have been identified as being able to stop cancer. Even crude preparations work to stop many forms of cancer. Some forms of cancer don't die, but it is possible that even these can be stopped with the right cannabinoid combinations. However, the Drug War ended all research on cannabinoids in 1937, and no clinical trials have been done since. It is very likely that 10's or 100's of millions of people could have been spared a painful, demeaning death. Instead, the US used cannabis to criminalize non-whites, strip them of voting privileges, incarcerate them or kill them outright.

The “health care” system in this country simply is not. It is just unbridled capitalism.

Why I will never get treated, should I need it.

Corporate system designed to make profit for unscrupulous on the backs of citizens. I blame Nixon and Reagan.

Capitalism at its ugliest.

It's so unfair and wrong