Declaring CNN and Twitter as an “enemy of America,” and proclaiming “Communist Democrats can't stop the truth,” Rep. Marjorie Taylor Greene (R-GA) denounced her permanent banishment from Twitter. The ban occurred just hours after she published a tweet, falsely suggesting there have been “extremely high amounts of Covid vaccine-related deaths.” Twitter cited a “strike” system for violations of its COVID policy, which bars users from sharing content that is “demonstrably false or misleading and may lead to a significant risk of harm.” Five or more strikes lead to a permanent suspension.

OK, but my question for Marjorie Taylor Greene is - if Twitter is really such an “enemy of America,” then why is it you seem to be constantly on it? Perhaps folks like her, Matt Gaetz, and Lauren Boebert ought to consider starting their own social network. After all, I believe Sarah Palin also became frustrated with Twitter, and tried to start her own platform. Now, if I remember correctly, I believe Palin’s social network was called “Quitter.”

Now, Twitter says they permanently banned her after she committed “five strikes.” Really? Five strikes? I mean, what kind of baseball rules are those? Hell, if baseball allowed hitters “five strikes,” then each game would last about 12 hours. All of that aside, MTG appears to have gotten her suspension the old-fashioned way - she earned it! Frankly, I say why stop with just suspending her from Twitter? Hell, we ought to suspend her from the friggin’ human race.

Fact is, she’s basically just “Donald Trump in a dress.” That means Marjorie Taylor Greene - is now “Marjorie Taylor Gone.” Now, in her defense, I understand her frustration with things like vaccines and the ways of the modern world. Why, not to be critical, but she’s obviously someone much more suited to be out there in the frozen tundra - chewing her way through a Pleistocene mammoth hide, than sitting in Congress. 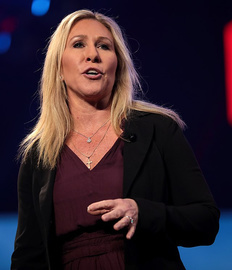 What kind of kook-aid (intended) has this woman been drinking?

@Charlene And overdosing on horse wormers!

Considering the source, your right