During an Indiana state Senate committee hearing about a proposed bill that would ban “divisive concepts” in school classrooms, Republican Sen. Scott Baldwin said teachers’ lessons about fascism and Nazism need to be “impartial.” Sen. Baldwin, who co-wrote the bill, added that “I have no problem with the education system providing instruction on the existence of those ‘isms,’ ” but “I believe that we’ve gone too far when we take a position. We need to be impartial.”

Now, in all fairness, Sen. Baldwin said the point of his bill, is to allow students to “formulate their own viewpoints.” Well, then, in that same spirit - I would assume the good senator would have no problem with kids forming their own “viewpoints” about folks like, say - Jeffrey Dahmer. After all, we must remain impartial, and I’m sure there must be people out there somewhere, who feel deeply that Dahmer was simply a misunderstood, avant-garde, gourmet chef - and children need to be aware that there’s also that side of his story.

That said, I suppose we really ought to be grateful to Republicans for their efforts to broaden our horizons. Take these Nazis he mentions, for example. Why, who knew the practice of torturing, killing, and maiming people in murderous death camps, simply because of their race, politics, disabilities, sexual preferences, or religious beliefs - had another side to it? Why, I wonder if this Republican legislation will also require teachers to bring in outside speakers? You know, folks representing “both sides” of this whole Nazism/Fascism/Holocaust issue.

The truth is, these attempts at “impartiality” are really kind of touching. Wonder how “impartial” he feels about things like Critical Race Theory, or Donald Trump’s attempt to overthrow our democracy? My guess is, he’s not feeling quite that “impartial” about those issues. Just a hunch! That said, and you can call me old-fashioned, but I’ve always considered Nazism and fascism as pure evil, so should anyone ever try and tell you that we should discuss Nazism and fascism “impartially,” just know that you’re looking right into the eyes - of a real-live Nazi. 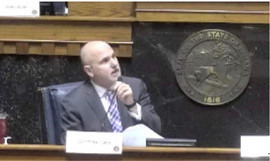 What do we do with a quarter of the population completely devoted to moral degradation, stupidity and hate?

Or, he would have to allow the readings of ex slaves and their views on slavery. I used to teach Frederick Douglas; I doubt he wants that.