Rep. Marjorie Taylor Greene (R-GA) went back on the Alex Jones show this week to discuss a conspiracy theory called the "Great Reset,” which he believes is a plot by capitalists to “impose socialism on the world,” with the ultimate goal being a "90% population reduction by 2030.” Jones told Greene he expects a nuclear war to "breakout" in the coming days as a part of the "Great Reset.” Jones added that “They think you're dumb and will think the breakdown of civilization, the insane energy and food prices, along with and all the hyperinflation, is because of Russian President Vladimir Putin - not because of the Great Reset, not because of Dr. Anthony Fauci."

Wow, the “Great Reset” eh? Gee, that is some really “big news!” Well, at least “big news” for some, but “comedy” for most of the rest of us. Now, in their defense, I have to admit I had to pull one of those “Great Resets” myself after my iPhone completely froze up on me, but I digress. Now, if you ask me, the most immediate danger about all this nonsense is that folks with such “creative minds” like Jones and Greene, may eventually put publications like “the Onion” out of business.

Anyway, they’re claiming the capitalists will soon try to impose socialism on all the world? Why, how fiendishly clever of them, but how exactly would that work? Please explain again why capitalists would think it beneficial to kill off all their workers along with all their consumers? Now, I realize Republicans aren’t all that good at math, but it sure seems like there’d be almost no one left to either make or buy any of their products.

I mean, isn’t capitalists forcing socialism on people - a wee-bit like vegans forcing people to eat fried bacon, or chickens demanding foxes in their chicken coops? Details, details! Oh well, on a positive note, I suppose we can at least find some comfort in the fact that these criminally insane half-wits aren’t heavily-armed. Oh, wait…! 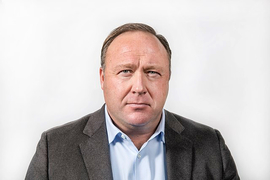 Are you not aware the great reset is on prince charles own website and that time magazine has a section devoted to it? World leaders have talked about it. The leader of the wef has said that over half of Canada's cabinet has been infiltrated with his young global leaders and when asked they pretended the sound didnt work. Are you people retarded? They arent capitalists, they're globalists. They don't care about where they get power or money communism works just as well. justin trudeau in 2012 said he admired Chinas dictatorship (where they are murdering muslims) because of the ability to do whatever the government wanted quickly (without worrying about those pesky freedoms getting in the way). We won't be able to drive or travel because it's bad for the environment they will. We won't be allowed to have kids, buy things, eat meat. They will. We will consume corn syrup and crickets (they have spoken about eating insects), they will get healthy food just like in many dictatorships it will just be a worldwide dictatorship. Communism is not some ideological wonderful world. The rich and corrupt take power and enslave everyone else. Look at how your own communists in BLM have been found to steal money and be corrupt. Capitalism is also a marxist word. The free market is not billion dollar corporations teaming up with governments. "Capitalism" is supposed to be about the free market. It isnt free market to use government to censor people and businesses and squash small businesses. That's more in line with communism. But it's not REAL communism right? You laugh and think it's impossible because youd fight back but you already dont. Canadian truckers fought back against the government and people who believe our freedom can and should be suspended to protect the weak. Would you accept trans people having to reveal their genitals before entering the bathroom or be refused? So why do you support people being forced to reveal private medical information? Then you say it's a choice when people get fired. But a woman who refuses to have sex with her boss or get fired is wrong. They told you it's the right thing so you believe it. It hasn't occured to anyone that we all are responsible for ourselves, not submitting to a less free world for the "benefit" of others. But yeah keep following that news that tells you theres no american biolabs in ukraine while there ARE ukranian biolabs funded by america that americans are afraid russia will access. You people deserve the shit world after "the great reset".

That was a nice translation from the original Russian, Boris.

Wishful thinking. If only. Too bad Omicron faded so quickly.

There will be another variant, what will we do then, have a world war?

Their stupidity knows no bounds!!!

I"m just a pawn in the Great Reset?..well in that a demand a Great Factory Reset...it'sso not fair that only the 1% and Vulture Capitalists get to reap the rewards..harrumph...