A report has surfaced that billionaire Elon Musk exposed himself to a former SpaceX flight attendant while on his private jet. The report claims Musk exposed himself to her and then offered to give her a horse in exchange for sexual favors. The incident allegedly took place in a private cabin on the aircraft en route to London in 2016. Musk rubbed the woman's leg and pleaded for a sexual massage, which she firmly declined. The details of the offense were laid out in a signed declaration, with Musk’s aerospace company SpaceX paying out $250,000 in 2018 to settle her sexual misconduct allegations - with the hope it would all go away.

So, let me get this straight. We have a jackass, offering to buy a woman a horse? Gee, that’s a switch! Of course, because it’s Elon Musk - you’re not getting the entire horse, you’re only getting the “horse's ass.” All I can say is, let’s hope it wasn’t the horse I bet on in the Kentucky Derby. The poor thing looked pretty constipated.

Ironically, Musk just announced via a video conference call, that he can no longer vote Democrat and is now a Republican. Guess this sexual assault allegation was needed to prove to conservatives that he is really serious about becoming a Republican. Well, now that he passed that test, he’ll certainly rank high among possible GOP candidates for president in 2024.

Anyway, back to the incident - so apparently Musk grabbed the poor woman’s leg, exposed himself, and then offered to buy her a frigg’in horse? Wow, that’s some “fancy billionaire foreplay” if you ask me. Who knew the world’s richest man would try the old ”Be nice to me little girl, and I'll buy you a pony” line.

Frankly, I’d like to hear what the ”horse” thinks about all this, but who knows if Marjorie Taylor Greene is even available for comment. Of course, expect Elon Musk to claim it was all just “horseplay,” and that he was just trying to show this SpaceX employee his “rocket.” Hell, sounds like Louis C.K. is only a couple of billion dollars away from everything being forgiven for him too.

Gee, I guess this means that being a multi-billionaire doesn’t automatically make you a great guy after all. Meanwhile, while Elon Musk tries to finagle his way out of this mess, expect Donald Trump to start bragging about how he makes way better “hush money deals” than Elon Musk does. Apparently, some things never change. 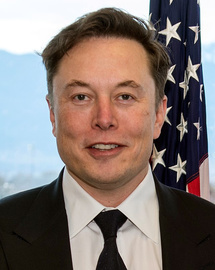 He’s a disgusting man, full of himself with no redeeming qualities! Money certainly doesn’t give a person class that’s for sure!

I see his hair plugs worked. He probably got them from his ass.

Money makes you over privileged