We rely on members to let us know when posts contain content that violiate the community guidelines. The most common reason that content gets flagged is that it contains dehumanizing or trolling/baiting text. Getting too many flagged posts will result in account termination.
Visit Group Join Group
1 8

During an interview with Fox News host Maria Bartiromo, it appears Republican Sen. Roger Marshall (R-KS) believes that Kansas has recently geographically moved away from the Mexican border, claiming that Joe Biden’s policies have migrants "stacked up" and waiting to enter the United States, and "this is why Kansas is no longer a border state.”

Gee, so Kansas was once a border state? Who knew? Frankly, I’ve always assumed that if you’re traveling by tornado, it was located right next to the Land of Oz, but what do I know? Anyway, it appears geography is another subject Kansas Republicans must have outlawed and discarded right along with that dreaded Critical Race Theory.

Now, to quote the late, great Sam Cooke, it kind of sounds like Sen. Marshall “don’t know much about history, don't know much biology, don't know much about a science book.” Of course, giving Sen. Marshall the benefit of the doubt, this may have been a feeble attempt to make a Civil War reference. Even so, while Joe Biden is obviously pretty damned old, it would still be a real stretch to try and pin Civil War border issues on him.

That said, and in Sen. Marshall’s defense, Kansas is actually bordered to the south by Oklahoma, which compared to most other states, is pretty much like a “foreign country.” Either that, or geologists have somehow missed a massive tectonic plate shift of “biblical proportions.” Then again, there’s always the possibility that Sen. Marshall is also “borderline” crazy.

Meanwhile, conservative Republicans are reportedly busy trying to make a few changes to the wording on the Statue of Liberty plaque that currently reads “Give me your tired, your poor, Your huddled masses yearning to breathe free, The wretched refuse of your teeming shore.” The new, revised Republican version would add the phrase “Terms and conditions may apply!” 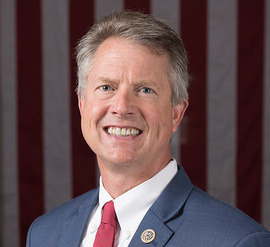 Amazing he made it to adulthood.

@johnnyrobish You have a point!!