MyPillow CEO Mike Lindell announced on the right-wing network RSBN, that Walmart has informed him it has joined retailers such as Bed Bath & Beyond, Kohl's, H-E-B, and Wayfair - and will no longer sell his products.

Gee, Walmart has standards? Who knew? All I can say is, when you’re considered way too whacked-out for even Walmart customers, perhaps it’s time to go back on the meds Mike. I hear the Walmart pharmacy has a sale going on for Thorazine. I mean, when you've lost Walmart…

This is actually pretty big news, because no one has their ear on all things “deplorable” more than Walmart. Of course, Walmart doesn’t give a rat’s ass that Lindell tells lies about the election. They only care that he generates negative publicity. Frankly, the dude’s politics have gone so far to the right that at this point - he may as well just grow himself a Hitler mustache.

So, where do you go when even a big supporter of right-wing causes like Walmart cancels you? Four Seasons Landscaping? One thing’s for sure, no matter how much Lindell bad mouths them, there’s no way Trump World is gonna boycott Walmart. Fact is, if he keeps up this insane nonsense, he can just forget about MyPillow altogether, because it’ll be time for “MyStraightJacket.” 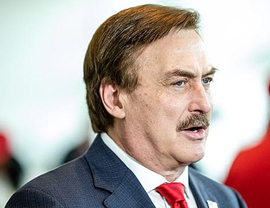 How much further right can he go before he's left?

Lindell does not need their money or their sales. He is making millions with his bizarre far out claims.