Missouri Republican candidate for US Senate Eric Greitens has released an extremely violent and controversial new campaign ad that calls on MAGA supporters to “hunt down RINOs,” a term used by the extreme right which means “Republicans in Name Only.” The ad features Greitens and an armed squad of militia members storming a house occupied by a “RINO,” and all of them opening fire as soon they enter the premises. Greitens is a former Navy SEAL and disgraced Governor of Missouri, who was driven from office for sexual assault and campaign financing impropriety, as well as claims of physical abuse by his ex-wife.

Now, I don’t know about you, but THAT is exactly what I'm looking for in an elected official. Someone who, if I happen to disagree with any of their policies, will hunt me down, and then storm my house - backed up by a squadron of heavily armed militia madmen in tactical gear. Of course, Attorney General Merrick Garland will simply laugh and say, “Relax! He’s simply trying to reach voters in that critical psychopathic killer demographic.”

You see, these sick fucks actually seem to believe they are “at war” with the rest of us. Sadly, they now also control “most” of the Republican Party - and are taking extreme measures to ensure they get control of the rest of it. I mean, Greitens is literally telling some of the dumbest people in the country to “go out and kill members of his own party.” All Greitens has to say is "Today we're going RINO hunting,” and the half-witted fascists all start to salivate like “Pavlov's dogs.”

Now, one might ask, who would actually vote for this bigoted, intolerant, violent, sectarian, sexual deviant of a psychopathic monster - unless you were suffering from a severe head injury? Of course, the answer is “its Missouri” - so lots of people will. And, if you think he’s popular now, just wait till he starts running his next ad - "Gas Chambers for Libtards.”

The fact is, this ad clearly demonstrates the true essence of today’s Republican Party and its supporters - “intolerance, violence and total lack of civility.” I think congratulations are in order for candidate Greitens and his political handlers, for capturing “MAGA depravity” in such a manner that only a true Trumpian psychopath could really appreciate. The funny thing is, mainstream Republicans actually invited these monsters into their party, to get more votes. Gee, who could have imagined it would all soon spin out of control?

Anyway, so let’s see here. We have candidate Eric Greitens running for the United States Senate, who stands accused of beating and threatening his wife and children, blackmailing his adultery partner, campaign financing impropriety, sexual assault, and advocating killing his political opponents! Now folks, if you ask me, there’s a place for people who behave like that. And that place is - the Republican Party. 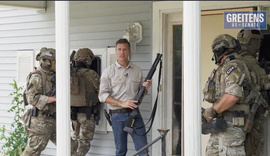 My oldest son used to admire this man. Eric Greitens started an organization called The Mission Continues, which helps former service members adjust to civilian life by finding ways to serve communities. He also wrote a couple of books that my son found inspiring. He says he "stopped paying attention to that fool" and that he's now a long way from the man who did those things.

Thank goodness your son sees him for what he is.

@Redheadedgammy yeah, he quickly did. His brother probably likes him

@JonnaBononna It is painful when we see our kids get Bamboozled by these hypocrites and liars. Both of my smart capable son’s are MAGA, and only watch Faux noise and other right wing sites that keep them stirred up and angry. I had to insist that we don’t talk politics to keep the peace in my family.

These are sick people who should be locked up. I can only hope there are some sane republicans left that will find a way to clean this rot out of their party.

If they start calling for gas chambers for Libtards, I will buy a gun and learn to shoot. I would enjoy taking a few of them with me if they ever came for me... I would never go quietly to a camp for their opponents.

You're not alone in that thinking, my friend!

The scary thing is that there are people who will take his rhetoric seriously!! I grew up in Missouri, I can attest that there are many stupid people!!

I grew up in Ohio - and I can say "ditto" to what you've just said.

People like Greitens appeal to the "have it your way" voter projecting a message of "you can have it and change it" right now. It's surprising how many will believe this. The man is a disgrace.