Matt Gaetz Implies Pro-Choice Women Too Ugly to Get Pregnant

The Huffington Post reports Matt Gaetz (R-Fla) recently spoke at the ultra-conservative Turning Point USA’s Student Action Summit in Tampa, and got huge laughs and applause from the crowd when he asked “Why is it that the women with the least likelihood of getting pregnant are the ones most worried about having abortions?” Gaetz further added that “Nobody wants to impregnate you if you look like a thumb.” This isn’t the first time Gaetz has suggested pro-choice activists have trouble finding sexual partners. In May, he tweeted "How many of the women rallying against overturning Roe are over-educated, under-loved millennials, who sadly return from protests to a lonely microwave dinner with their cats, and no bumble matches?”

Well, I can see the Republican Party’s outreach to women voters is staying right on track this election cycle. Of course, the truth is, you can take everything Matt Gaetz says about women’s appearances with a grain of salt, because when he tells you he only dates “10s," he's talking about their age - not their beauty. That’s because Gaetz’s definition of “ugly,” is any female over fifteen. In fact, his dating mantra is “if they’re old enough to drive - forget about it!”

So, let’s just put all logic aside, and simply pretend US Rep. Gaetz is correct in his analysis that “the only women who’d ever want an abortion, would be women who are way too ugly to find sex partners and get pregnant.” OK Matt, if that’s true, then I guess you’d have no problem if we go ahead and repeal all those Draconian “anti-abortion laws” you Republicans have been passing, because obviously - no woman who’d want an abortion, will ever get pregnant. Problem solved! 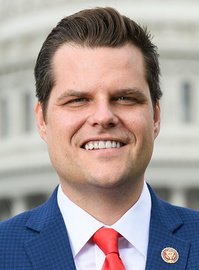