During a recent interview on Fox News with Sean Hannity, former president Donald Trump tried to defend stashing extremely sensitive classified documents at his Mar-a-Lago resort by saying he was the president, and the president can declassify, simply by “saying its declassified.” Trump further added that “there doesn't have to be a process - there can be a process, but there doesn't have to be.” Trump then told Hannity that if you're the president of the United States, you can actually declassify something “by just ‘thinking’ about it.”

Oh, my word! You mean to tell me Trump actually thinks he can declassify the government's most guarded secrets, simply by “thinking about them?” Now, not to be critical, but it sure sounds like someone has been spending way too much of their spare time binge-watching old episodes of “I Dream of Jeannie.” I mean, about the only thing he left out was that he also sprinkled the documents with “pixie dust!”

This is enough to make you wonder “what the hell?” Could he be angling for an insanity defense? I mean, I used to think the dude belonged in a jail cell. Now, I think a better choice might be a “padded cell.” All I can say is, it’s a damn shame he doesn’t also believe all these “superpowers” he possesses, will also allow him to fly.

Meanwhile, New York Attorney General Letitia James just filed a sweeping, expansive fraud lawsuit against Donald Trump and his three adult children, which some speculate could basically mean the end of the Trump Organization. This has Sparkle Princess Ivanka asking “We aren't going to be poor are we, Daddy? I’m much too pretty to be poor!”

Of course, all this must first be tried in court, but we all know Trump doesn’t do well under oath. Let’s face it, folks - you know you’re in legal jeopardy when people in the courtroom can’t decide if you’re “taking the fifth,” or if you’ve actually “drank a fifth.” Is there a lesson here for our young people? You bet - and that lesson is “a diet of Big Macs, French Fries, Diet Cokes, and Adderall - just don’t mix.” 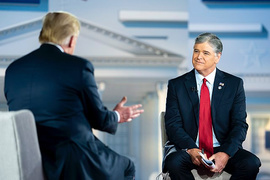 His claims Should be hilarious, in a sane world....

I didn't see the interview, but I'm guessing Hannity sat there giving him his cow eyed look of "Yes master, what ever you say," then told his audience, "There you have it."

And the 11th circuit stomped trump and his idiot judge down this morning!

Yup..just think about it, I'm sure he's already thunk his pardon into existence..along with a family Dacha on the Black Sea, just across from Puti's place. It's a good thing Mikey Lindell invented a My Pillow padded cell, seems the 2 of them will be the first occupants...

Lil donnie is in deep kimchi

I just tried kimchi for the first time and didn't like it, so you can throw mine in there......

@AnneWimsey I like it! Years ago I worked with mostly immigrants from the Far East and they were surprised I ate it. There is a cucumber version that is less pungent than the more common cabbage that I love.