In a recent interview, US Senator James Lankford (R-OK) told Christian Nationalist Tony Perkins from the Family Research Council about how they were experiencing a massive drought in Oklahoma, and the week after they passed anti-abortion legislation, “we had the most overwhelming rainstorm that came across the state.”

No kidding? If heavy rain is a “blessing,” then I’m guessing Puerto Rico must be feeling extraordinarily blessed lately. Now, not to be critical, but Sen. Lankford’s God may have gotten just a wee bit too enthusiastic about all this anti-abortion legislation and overshot his mark a bit, because some of Lankford’s “overwhelming rain storms” ended up causing major flood damage in Oklahoma cities.

Frankly, it isn’t as if this hasn’t happened before. If I remember correctly, back in 2019, when Oklahoma was experiencing serious flooding throughout the state - Sen. Lankford was claiming “gay people are the cause of natural disasters.” The funny thing is - shortly thereafter, Lankford lost HIS home to flooding. Let’s hope Lankford’s God doesn’t screw up rainmaking again, and it ends up “raining babies.” Then, there’d be nothing to abort.

Gee, kinda makes you wonder just who Lankford’s God might have been all pissed off at during the “Dust Bowl?” They didn’t get any rain back in those days. That was back in a time before meteorologists and climatologists realized all you needed to do to make it rain - was to simply pass extremely harsh anti-abortion legislation. Who knew? Of course, no Dust Bowl would have meant we wouldn’t have had any hobos hopping freights, leaving poor John Steinbeck with nothing to write about.

Anyway, so we have an entire state full of people who apparently feel the best person to represent them in the US Senate is someone who believes it's 1022, not 2022. Nothing scary about that. Besides, folks like Tony Perkins and Sen. Lankford know one of the coolest things about claiming you’re actually “speaking for God,” is that they feel pretty safe God won’t come down and contradict them. That’s why so many thinking people sarcastically remark, “Gee, I think I’m in the wrong business!” 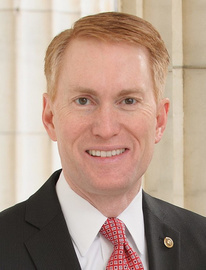 Oklahoma is tornado alley. Does that mean they are actually extraordinarily cursed? Godless New York has not had a drought and is just as lovely and green as can be…