We rely on members to let us know when posts contain content that violiate the community guidelines. The most common reason that content gets flagged is that it contains dehumanizing or trolling/baiting text. Getting too many flagged posts will result in account termination.
Visit Group Join Group
2 7

In an extremely controversial move, Arizona Pima County Superior Court Judge Kellie Johnson has lifted a 50-year-old injunction on an 1864 civil war-era state law that had been in place before Arizona was a state. That law puts a near-total ban on all abortions in the state.

Smart move Arizona! Because there is nothing 21st-century Americans want more than for politicians to bring back oppressive civil war-era laws. You know, laws written before women even had the right to vote and were still legally considered to be just property. The idea of disenfranchising over half the population should prove extremely popular. Hell, I’m sure this ruling has giddy Arizona politicians thinking, “Hey, maybe it’s time to revisit that whole ‘slavery thing’ again.”

That said, I suppose extreme right-wing judges resurrecting civil war-era legislation shouldn’t be all that shocking, considering Justice Alito went back a full five centuries in his writing on the Dobbs decision to find something to help him justify overturning Roe. No big deal. What’re a few centuries among friends? You see, when these Republicans tell you “they wanna take the country back,” they aren’t kidding! They wanna take it WAYYYYY back!

I mean, rulings like this are almost enough to make Iran’s “Morality Police” jealous. Now, if Republicans can just find a way to get rid of those pesky 13th and 19th amendments, they’ll be on their way to their vision of a White Christian Fascist Theocracy. Is there any good news among all this depressing nonsense? Well, yes, of course! At least Republicans and Judge Kellie Johnson haven’t as yet reenacted the Witchcraft Act of 1604, and that should count for something. 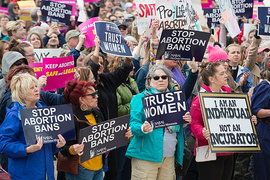 Just wait till SCOTUS ends the right to birth control or marriage equality laws, including race.