During a segment on Neil Cavuto’s Fox News program, US Transportation Secretary Pete Buttigieg was told by the host that Marjorie Taylor Greene is claiming "Mr. Buttigieg is trying to emasculate the way we drive" by supporting electric vehicles. In response, Buttigieg told Cavuto that “my sense of manhood is not connected to whether my vehicle is fueled by gasoline, or whether it's fueled by electricity.” When asked by Cavuto if he was offended by what Greene said, Buttigieg remarked "To be honest, there are other members of Congress that I pay more attention to when I'm thinking about opinions that really matter.”

Oh, come on now! Let’s get real. It would take a helluva lot more than an electric car to “emasculate” Marjorie Taylor Greene. Besides, I’m pretty sure “real men” actually ride horses, anyway. Of course, I’m certainly no psychiatrist, but it sounds like Greene’s anger could be a combination of both “road rage” and “roid rage,” leaving her at the intersection of “homophobia and climate denial.”

Now, if Greene is actually correct that using electricity rather than gas emasculates people, then please explain how the human race has managed to procreate since we transitioned from gas lighting to electric lights all those years ago. I mean, just ask yourself, if Greene’s logic is correct, wouldn’t just flipping a light switch on and off, be pretty much the same as getting a vasectomy? I rest my case! 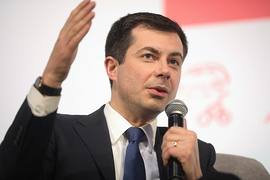 It frightens and disgusts me that people like MTG are allowed to serve and speak in the public forum. People who voted for are just as evil and narcissistic as she is. The only microphone she should have access to is the one from her padded cell or drive through at Wendy’s.

Why, what Green is saying is almost like saying that not letting insecure men keep driving huge pickup trucks and owning lots of guns, both in order to compensate for their undersized manhood, would be the government forcing emasculation on them.... why, that would be downright communistic, right?

Just like drump, every single time i think "can't get any worse", she does.