We rely on members to let us know when posts contain content that violiate the community guidelines. The most common reason that content gets flagged is that it contains dehumanizing or trolling/baiting text. Getting too many flagged posts will result in account termination.
Visit Group Join Group
4 18

It's amazing that a cartoon created in 1941 applies so well 80 years later. 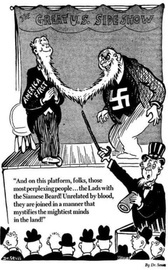 Fascism and the repugs seem to go hand in hand

It's in their nature and always has been.
Henry Ford was a Nazi sympathizer of epic proportions.
George H Bushes father George W. Bushes grandfather, sold aircraft fuel to the Nazi regime while we were actively at war with Germany.
I can't and will not now or ever work for an authoritarian effectively.
I believe in teams not fucking kings.
My boss is a Trump loving authority freak, he figured out (because I was quite clear about it) that I don't play that shit. So we never talk, he handles whatever administrative responsibilities it is that require my name on his list, but I basically come in when I want, leave when I want, and work on what I need to work on without supervision of any kind.
Our lead electrical engineer was the same way I am about this, and the first person I know that died of Covid, but some years ago he all but quit over the same boss and his petty bullshit when he made a scene about him coming in five minutes late.
For me it happened when we were about to have a meeting as I went into the conference room I pulled out my cell phone to silence it, "Willow, no phones in the meeting, you owe us a box of donuts!" It's been like four years and I haven't bought a donut yet, stupid prick.
But when I'm working with the mechanical engineers we put in late hours, work on weekends, come in early yet not one of us gets weirdly bossy like that.
I'm convinced it's a form of mental illness, one I had more then enough of in the military.

Posted by phxbillceeAh, but who conquered who??? [youtube.com]

Posted by scurryHow cute is that?

Posted by scurryDid I swipe this from here??

Posted by phxbillceeCan't get thru 1 family outing without drama...

Posted by LorajayFor some reason this reminds me of Israel.

Posted by Lizard_of_AhazBecause sometimes you just have to hit it....

Posted by jeshueyWell earned I'd say...

Posted by OldMetalHeadGreat graphics in that game

Posted by scurryUhm... I don't think that's how you do that...

Posted by scurryThere's a lot going on here...

Posted by phxbillceeNow them is fightin' words!!!