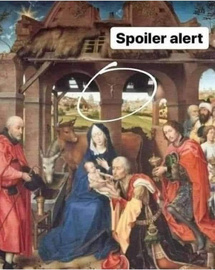 Obviously either a slip up or simply an additional to the propaganda value of the work.

All these paintings were created in the middle ages and commissioned by the wealthy usually the clergy. During those times one was born, lived and died under conditions that had been static. The assumption was made that things had and would always be the same hence all the trappings of the period (like chain mail and manner of dress). The cross had become a symbol in the 3rd century ACE so it was assumed it was always the case. Another assumption made, even by people in this age is that the Christ and all his followers were literate. They were not. There were no schools (and no need for them) and writing materials were rare and expensive. Even many rulers had scribes as they themselves could not read or write.

Be funnier if it was one of those hideous elf on a shelf dolls.

PRICELESS! Do you happen to know who the artist is?

Many artists of that period were commissioned to paint according to the wishes of their benefactor (the church primarily).. That little addition was probably requested 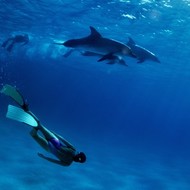 Agreed, although you would think that a clergyman would know enough not to put the cart before the horse. lol These death cults are certainly fixated on the end game.

Posted by OldMetalHeadI can't unsee it

Posted by glennlabI kind of like my new pet, you should get one.

Posted by bookofmoronspretty much sums it up