We rely on members to let us know when posts contain content that violiate the community guidelines. The most common reason that content gets flagged is that it contains dehumanizing or trolling/baiting text. Getting too many flagged posts will result in account termination.
Visit Group Join Group
6 0

New to this group, thanks for having me

Thought I would share something that has had my poor wee atheist brain turning for a few days (the article is a few days old). To me this read as religious institutions citing "free speech" as an excuse to continue ostracising communities that don't fit with their worldview. The idea that it could inform such a crucial piece of policy as hate crime legislation worries me deeply. What thoughts do people have on this? I would be interested in the discussion that would follow on a forum like this.
Thanks all 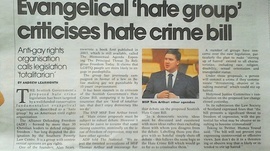 Ian Stewart of atheist Scotland says he can use the hate crime bill to attack Christian sermonisers so maybe it is not so bad after all.

Hi Hawkeye, welcome to the site.
I think it is a bit of a non story. American religious nutters do not have any real influence here.
Most hate crimes are already covered and this appears to just filling in any gaps and simplifying the legislation.
Apparently the bill will also remove the common law offence of blasphemy which surprises me as I thought it had long since been consigned to history.
We have come a long way since the execution of Thomas Aitkenhead in 1697

The US religious right likes to try to exploit the Intolerance Paradox. However freedoms are not defended but defending the freedom to oppress. When the mob boss says in front of Frankie the enforcer "wouldn't it be a shame if Louis Looselips had a fatal accident" he knows what the likely result of those words will be. That's not freedom of speech it's conspiracy to murder. Hate speech laws extend that idea. The target audience might be larger than just Frankie the enforcer, the potential victim pool might be larger than Louis Looselips but if the reasonably expected outcome of your speech is that someone gets hurt then you're culpable in that outcome.
Now I fully support the right of religious people to dictate to their followers what they eat, wear and how they behave. Even their attitude towards others outside the religion. However I can't accept a religious exemption to breaking the law. If it's illegal for a shock jock to call for homosexuals to be stoned to death it should be just as illegal for a preacher to say the same thing even if it is in their holy book.

American Religious nutters aside, I've since had the opportunity to read the proposed legislation after more widespread criticism came to light. I'm no legal scholar but to my untrained eye it does look rather vaguely drafted in areas. I think can see why the the section regarding performance of plays in particular has come in for close scrutiny. Stirring up hatred is not defined and it's apparently possible to do so by neglect.

I am sorry to say that free speech always involves allowing people to say things which are unacceptable, even harmful and stupid. But if you are to have it at all, then it has to be a absolute, within reason such as promoting violence can be banned, one of the few real ones. Because if you give someone the power to decide who should and who should not speak, then you create the prefect environment for a criminal to exploit. Also you force some forms of speech underground where they can become far more dangerous. Since they are no longer monitered by main stream society, no longer held up to ridicule, and able to attract support from a far wider base, since the one successful underground movement soon becomes the leader of them all, and soon becomes an alternative society.

I don’t know enough about this Bill to form an opinion. I would have to read it in greater detail first, to digest its implications...I have not participated in the poll. As a Scot, who lives in Northern Ireland, I am interested in this issue, although was not aware of it as I don’t closely follow what is happening at Holyrood. I will try to find out more.

Btw...welcome to the site! Nice to welcome another Scot.

Posted by MoravianPolitics in the UK

Posted by webspider555Vaccine already in production

Posted by HawkeyeNew to this group, thanks for having me :) Thought I would share something that has had my poor wee atheist brain turning for a few days (the article is a few days old).

Posted by webspider555I’m beginning to wonder whether our government is just incompetent or are all these things happening just to get us in a rage arguing amongst ourselves.

Posted by MoravianWho's the daddy ?

Posted by MoravianPriti Patel. The Home secretary who said that under her immigration policy it is unlikely that her parents would have been allowed to settle in the UK. What a pity.

Posted by webspider555I doubt if anything can stop this now

Posted by webspider555Getting complicated for the Russians now

Posted by webspider555The two Ronnies at their best