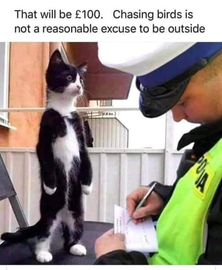 Cats also catch mice , rats , squirrels , lizards , and bugs . In areas where other predators were removed , prey over populated the areas and stripped the land of so much in the way of plants until the areas became drought plagued and rivers dried up , causing starvation for the herbivors , until some predators were reintroduced into those areas . Amazingly , when wolves were reintroduced in public park lands , the plants had an opportunity to grow back , carbon was converted to oxygen , the rivers began to flow again , beavers began building dams again , and nature regained it's balance . I used to enjoy watching the hummingbirds . When a soon to be Momma cat chose to move in with me , I stopped putting out the hummingbird feeders and stopped putting out bird seed . Can't have both in the same areas . They still bring me lizards , but these days the lizards still have all four legs and their tails . The cats call me when they bring a lizard in , I praise the cats , catch the lizards and set them back outside .

Hope it smacked him in the face, claws extended when handing the ticket over.

Cats kill 1.3 to 4 billion birds and 6.3 to 22.3 billion mammals annually.
Un-owned cats, as opposed to owned pets, cause the majority of this mortality.
Predation by domestic cats is the number-one direct, human-caused threat to birds in the United States and Canada.
So it's NOT wind mills.

If everyone would just spay or neuter their cats and one of the feral cats in their own neighborhood that would reduce so many deaths!!!

I have spayed and neutered eight feral cats and all three of mine!!!

It does not solve the problem but it does help as time goes by!!!

@of-the-mountain If cats weren't cats we would be overrun by rodents.

Posted by godsux69420My son asked me “what happens after you die poppa?

Posted by KynleiSaw this at a restaurant last night. My Mom said, "Why does that oar say either on it?" Then it dawned on us. It's an either oar.

Posted by noworry28By the dozen.

Posted by LenHazell53Could you call this "A non Pan Frying Stick"?

Posted by FrayedBearWho knew this?

Posted by noworry28Can't give it up.

Posted by noworry28He was short with me.

Posted by pmar074I wasn’t sure if I should post this. It’s a fence sieve...