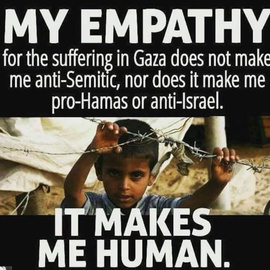 I see nothing more racist than people of Jewish faith/ heritage referring to themselves a race. And somehow criticising a supposed "secular & democratic" nation less than 100 yes old is also racist. Even a special word for this particular racism; antisemitic.
If you identify with a group and feel your group is superior to others, then it is you who will be discriminatory towards others.
Israel is not a kibbutz, it is a nation ffs. And Jews are people just like the rest of us. And the people of Israel tolerate right wing leaders for their country, who treat Israel like a kibbutz, a Jewish enclave, rather than an equal member nation of the world community. And Israel is fairly criticised for this attitude.
DAT the way I see it. Jews are people, and all groups of people have their fair share of dickheads.
Now if Israeli politicians participate in Sander's bashing, how loud will the cries of "foreign interference" be? Not very I feel.

If Judaism were a race instead of a religion, wouldn't they all be Ashkenazi? But we have:
Sephardim
Mizrahim
Teimanim
Kaifeng
Bene Israel (aka Shanivar Teli)
Habashim (aka Beta Israel)
who knows what else

Not to mention Israelis think they have some kind of link to Palestine, but they don't, really:
[theconversation.com]

Many consider Sanders to be leaning Zionist. He has only himself to blame for the divisive views towards him on Israel. While the article postures him as a genuine advocate for the Palestinians he has left a well open for other notions through his actions and or lack of actions. If this link works out you can search through some other sides of the story.

Yeah I know he's part of that curious species known as "liberal Zionist" and that he thinks BDS is anti-semitic. But the point is, even mild criticism of Israel is anathema to Bari Weiss and her ilk. Of COURSE the NYT would give the likes of her a platform.

ETA: the fact that he's the most pro-Palestinian of the Democratic candidates is problematic to say the least, but not surprising or unexpected.

@altschmerz well he's most likely going to go through pretty much the same smear campaign Corbyn went through. Warren also. He needs to pick a structured side and stick to it if he were genuine.

@William_Mary I think he's fundamentally incapable of doing that.

This idea that somehow criticism of Israel is anti-semItic is BULLSHIT!!! They have created many of the problems that exist over there.