I hate wishing my life away! But I'm in a hurry for a new economic and social structure for our grandchildren! Already preparing for 2024.

I offer you a party to keep up on ( [wsws.org] ) and news site they are related too ( [wsws.org] ) for reliable information that has been highly correct within history and predictions of what's coming at us. There's a reason they are attempting to demonize Marxism and suppress its teachings. Their agenda is to keep us oppressed. Stop being a committed slave. 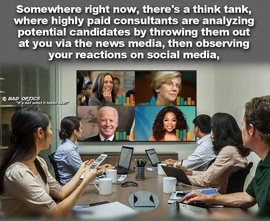 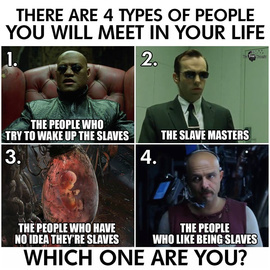 I'll take group #1, Alex, for $500..... I used to work for a market research company a lifetime ago. It was laughable at times. I remember one client they took on was a pompus Repub plastic surgeon who did reconstructive surgery. He was a typical country club Repub who was running for re-election to the US Senate and had a lot going against him issue-wise. His campaign came up with the brilliant idea (sarcasm) of trying to fabricate him as an environmental candidate so they could get independents and eco-friendly Dems to overlook his policies on economic issues, foreign policy, etc. They brought in a focus group to test this approach on and, needless to say, it didn't sell. One of the few times I was proud of and able to say that maybe Iowans had more horse sense than I thought. He was not re-elected.

Observers are the Fifth type of human, they are in the focus groups getting paid to watch.