My Religion Is a Country Club Theory: I was discussing gender pronouns and respecting a person's choice in alternative identities w/ my college student daughter this morning. (She has friends who're pursuing non-binary identities). I was making the point that when a person asks to be referred to by another identity, it asks nothing of us other than the inconvenience of having to remember. Unlike those things we're asked of from religionists all the time. Because religions are so culturally embedded, we tend to be blind to them.

I was making the argument, and she wasn't agreeing, that one of the problems I've w/ religion, and particularly Islam, is that it's like a country club: If you have a friend who's a member of a club with membership restrictions based on race, sex, or religion, you'd most likely have a problem with that friend. This is exactly what religion is: The Torah is full of severe punishments and restrictions. Besides tolerating slavery, rape, genocide, etc., G-d also hates non-virgin brides and disobedient children (stoning-worthy offenses), intermarriage, and keeping The Chosen "separate from the neighboring peoples with their detestable practices." Xtians hate gays and seem to relish the idea of non-Xtians spending an eternity in torture. Islam says flat out that non-Muslims must convert or die. (Non-Muslims are considered kafir, the opposite of the believer, one who conceals the truth of Islam. Jihad anyone?) Apologists will argue that non-Muslims exaggerate the significance but the Qur'an is full of threating language on the subject.) All of these traditions believe that life is but a wretched way station slowing us on our journey to the paradise that is our ultimate purpose. Now, fortunately for us, most adherents aren't nearly committed enough to do the dirty work their faiths demand. Still, they're the rules of membership for their "country clubs" of choice (as much as it is a choice).

To restate: Religious traditions demand action. Gender pronouns do not.

To wit: A biological female with (more than likely) two X chromosomes, who also eschews traditional gender pronouns, doesn't hurt you or affect your life in any way. Why not respect their wishes and stop wondering what their story or genitalia is? (And increasingly, science does tell us that there's more to the story.) Ultimately, it's none of our @#$%ing business. Consider it a no-cost social grace. 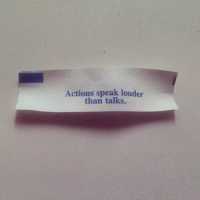 Well put. I think most people get agitated because they probably don't have much else going
on in their lives!!

You also state that if a person is a member of a certain country club, you'd likely have problems with them. The problem is that You state that those are the rules for membership but they are not. If being a christian meant you HAD to promote rape or hate gays, you might have a point but they do not.

@Deiter
"When someone is gender fluid, it affects you none whatsoever. When someone is relgious, the affects can be considerable"
The effects of gender fluidity can be as considerable at those of religion if policy, laws, and other actions are governed by said gender fluidity. The stereotype is that all religious want to impose their beliefs on us and that is just not the case... the vast majority of religious go about their day and don't bother you just like the vast majority of gender fluid go about their day and don't bother you. It's when either group, when any group, actually try to impose their beliefs or behaiviour on others that there is problem.

"I'm saying the club has problems and we're counting on its members to be moral enough to ignore those rules for our survival. "
Whereupon I'm saying the problems you state are stereotypical and vastly overblown.

"" I say we should call them out just as you would any racist or anti-semitic country club's membership rules. Is that too radical? "
Yes, if what you are calling them out on doesn't exist in reality. So if a specific person claims that gays should die or that we should rape all people, then of course they need to be called out. But to give blanket stereotypes that just becuase you are christian then you hate gays or promote rape, then that is too radical as it presumes that a majority of people behaive like the minority or not at all as you describe... ie the danger of stereotyping.

"gentials get mutilated, "
Not in the us, unless you count medical circumsicion which is not religious based.

"abortion clinics get bombed, "
More pro-life people have been killed than pro-choice.

"marriage licenses aren't issued, "
That is actionable and it was actioned upon. There, the compromise was that the liscence had to be issued but the person didn't have to issue it but had to the responsability to find someone that could issue it. This is a good example where specific action requires specific response so that laws are not interfered by belief while allowing people to exercise their belief.

"pastors call for death to homosexuals,"
I'm sure individuals do this. I'm also sure this is not the widespread policy of any religion.

"Why isn't this a mainstream position?"
Because stereotyping shouldn't be a mainstream policy. The acts you describe are not institutional and we must seek to allow freedom of religion while at the same time allowing freedom of law... not always an easy task but we shouldn't lean in favor of religion or secularism but address each case based on what society deems right and peaceful and fair.

@Deiter
All my claims are substantiated.

If you don't like your ideas being dissected, don't make them public.

You claim you want discussion but it seems all you want is agreement.

And stereotypes lead you to falsehoods as evidenced by your stereotypes about me based on age and location given I'm not circumsized.

I consider myself in good company with your daughter as neither of us agree with your stereotypical views.

I won't be labelled a Muslim apologist.. I know Muslims. They are just like you and I.

You see. Here's the problem. Reading takes time. They're are hundreds of posts added every day.

There are also lots of Islamaphobic posts, many disguised as atheist critique, which are added regularly.

It's an exhausting mine field. Clear language is needed.

Wouldn't it be nice to use gender non-specific pronouns . Do we really need to identify a person's gender every time we mention someone ? Whose business is it anyway ? Why is it shameful to simply use , " it ", if you're speaking of someone ?

I agree. Religions are meant to keep people apart, to divide and conquer. I have no issues with gender fluid persons, all I ask is that they forgive me when I mess up pronouns because I'm old with ingrained habits. For example when a Rebecca becomes a he my brain doesn't make that switch easily or quickly, but I try. If the bible is taken literally I would have been stoned ages ago. And I give the bible no place in my life today.

It's not like this is the first time of people have wanted to be called something new, or more respectful. What's the big deal?

I mean, what's the big deal about pronouns. I'm in agreement with you Deiter. My response might read as an attack on you. Sorry.

You can include a link to this post in your posts and comments by including the text q:120174
Agnostic does not evaluate or guarantee the accuracy of any content. Read full disclaimer.