I don't block people too often, it usually has something to do with extremes and harassment for me. I've discovered, from reading through fractured post, that I'm blocked by more people than I've imagined. I'm opinionated, I get it.

I think it's a useful tool, I just get curious about the missed portions of the conversation.

So, what is your opinion on the blocking tool? And why do you think others would block you?

I’ve only blocked Trumpers and racists so far. I’m not sure if anyone has blocked me or not. I don’t know why anyone would want to block someone as clever and attractive as you.

@Stacey48 That’s about the sweetest thing anyone has said to me in a while. Thank you for making my day.

I've never blocked anyone on here, and I haven't been blocked, as far as I know. I try to be reasonable and accomodating, though I might come off a bit snarky sometimes. Occasionally someone will get my hackles up, but no one's ever made me mad enough consistently enough to block them. I think it's a useful tool however.

“So, what is your opinion on the blocking tool?”

I think it should exist, because there are some obnoxious people who no one should have to put up with. That said, it seems unfortunate to me that the block feature is so often used as a first resort rather than a last.

I’ll build in lots of incentives and rewards for keeping channels of communication open, and reserve blocks for those who really deserve it.

On third thought... if someone really deserves to be blocked, maybe they actually deserve to be banned from the site altogether. I’d probably install a system of bestowing negative points (only one per offendee) instead of blocking, the accumulation of sufficient numbers of which would delete the offender’s account. Then it would be clear that the offending party was the common denominator rather than just another “he said, she said” conflict.

“And why do you think others would block you?”

I’ve probably been blocked more often than I know, but the only time I knew for certain I was blocked it was because I used a word in a sentence according to a somewhat obscure, but legitimate, definition of the word, and the person was annoyed by it. It was not an offensive or suggestive word, just an unfamiliar usage. I just don’t think people need institutional protection from ideas. If they can’t take exposure to unfamiliar ideas they should not join public discussions.

I think that the negative points system would be beneficial as I have sen this work on other forums.

As for your word usage, could it have been nine letters long beginning with an N and ending with a Y?

@Bierbasstard
I don’t remember the word but it wasn’t one that had any insulting connotations, either in standard usage or the way I used it. It wasn’t a comment made at her. It was just a discussion about some abstract idea, and she got upset because she said the word didn’t mean what I thought it meant... but the dictionary backed me up.

I've only blocked one person on this site and that was because she was (and probably still is) so fucking smug about her anti-science drivel and flagrant woo.

I have been blocked by at least two members because I challenged them on their B.S. I don't feel that I am missing anything.

I have blocked three men who were clearly scammers. I blocked them after getting private messages from them. I used to toy with some of them on other sites, but it stopped being fun after a while. Now I just block.

The only reason I could think that I would block someone in the forums was if they were hostile and harrassing me.

I don't block anyone's posts personally. There have been a few who have blocked me. Their loss. How can we have discussion and disagree civilly if we block each other?

I have been blocked becuase l piss some folks off. Sometimes l piss them off intentionally, sometimes not. I block Trump apologists, male bashers, and people who just want to go round and round on a back and forth with me. After a while l feel like they are just fucking with me.

Yeah, what is the opposite of misogynistic? I block habitual male bashers also.

@BlueWave l don't like it when men or women condemn an entire gender because of their bad choices. I have made some terrible decisions when it comes to women, but they were my decisions.

@Stacey48 That's funny. I told a guy l was going to block him, so he blocked me first. That really hurt my feelings. ☺

@BlueWave the opposite of misogynist is misandrist. Word of the day! ?

@Stacey48 Yes it is. If l don't piss someone off occasionally l feel like I'm losing my touch.

@memorylikeasieve Thanks. Did not know that. Sounds like someone's last name. ☺

I am here to have some sane and intelligent conversations. I will block if someone just does not get it and constantly posts dumb stuff I do not want to read. 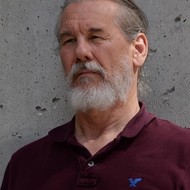 I block people who lash out at me, ridiculing me in public posts. Also men who continually send messages, after saying I'm not interested.

"Are you sadomasochistic?" a pervert asked. He kept pestering me with questions about my sex life.

So far, I have blocked eight men and one woman. This is setting boundaries.

Blocking stops the person from seeing and commenting on your posts. It also stops them from sending you messages.

I block them before they can block me.
I'm wondering if there's a limit.
It's addictive.

Blocking is like wearing a side arm...its there for your protection (sanity)...its a defensive weapon of last resort....which you should hope that you never have to use it.

Some members never take it out of its holster, some members are trigger happy mothers.
And some members attract the wrong kind of attention from trolls..so they are forced to use it more than they like.

I have blocked twice...one was a troll..the other an unbalanced person..who was a little too nuts.

I have been blocked once by someone who apparently according to other members is of the trigger happy types..who misinterpreted one single word.
It didn't bother me because this member was like Jesse James blocking people and it was like walking on egg shells anyway..??

I've blocked and been blocked. Just business as usual.

I haven't blocked anyone on this site but I have on other sites. When they are being a**holes or , obnoxious or just so far out there with their political views that I just can't take it anymore than I will

@Stacey48 I don't believe so. The members I have interacted with have been some good people.

People block for many reasons. I block anyone who is rude, crude, or lewd to either me, or any other woman, who is aggressively argumentative and/or keeps returning to the attack.

I also block some people who don't post photos or write profiles, any guy who mentions he likes hunting/fishing/or golf, any guy who says he does hook ups or is polyamorous. These are not people I want to date or even interact with.

I simply can't stomach conversing with misogynists, racists, homophobes, libertarians, the right wing and the selfish.

Never used. I tend to ignore and then tend to gp away. But I'm a guy and I betcha women get more of that type of harassment then fo in general.

join us on the offenders group. We don't use the report button but we may at sometime of other ban a member, but highly unlikely. you would fit right in !

@Stacey48
Well we are having more fun so far. We would love to have you ?

@Bierbasstard
Thanks for your support ?

@Bierbasstard
I think so, I am still there. Check with SukiSue ?

An opinionated woman, yeah sorta figured that out. You go girl.

How can you tell when someone has blocked you?

So far, nobody has blocked me. I may be wrong due to ignorance. No, I'm not a Trump voter.

I have never blocked any legitimate member of this site. As a man, I don't think I'm subject to the same kind of unwanted attention that women get, so I can understand blocking someone who just doesn't get it and won't stop harassing. I've been blocked by only one person that I know of and not for any harassment reason. I disagree with her decision, but it's her profile and her prerogative.

I haven't yet blocked anyone in here, but on Twitter, I block nonsense peddlers just to cut down on the noise (number of tweets in my notifications box) as I don't have a lot of time for all of it.

I don't block anyone, I haven't had to.

Fanburger might be my only block. Was a big improvement.

Used it a couple times, after encountering a couple guys promoting Breitbart and singing the praises of the Orange One. Wasn't out of meanness or bitterness, but we're clearly on divergent paths and there's no reason for our paths to cross again, so blocking just fine tunes my experience on the site.

How can we know if we have been blocked? I haven't found any of your posts offensive or block worthy I but did see your posts with some Trumpeters who may well have blocked both you and me. I haven't blocked anyone on any social media but know some of my redneck cousins have blocked me because of political comments.

You can include a link to this post in your posts and comments by including the text q:123990
Agnostic does not evaluate or guarantee the accuracy of any content. Read full disclaimer.