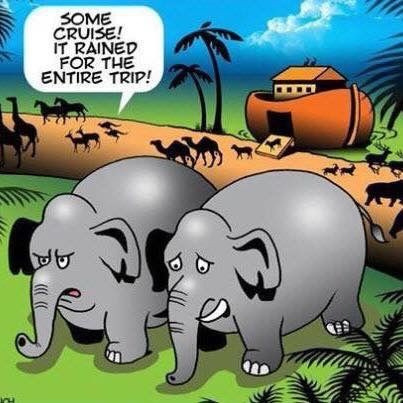 Not to take away from the humorous Ness of your cartoon, but did you know that their probably was a world wide flooding event? In culture histories all around the world, there are culture stories of a great flooding event. We also know from geology, that a flooding event did ideas happen, dating to the same time.

But it's not what one would think. At the time that the event occurred, most major cultures of the time lived either along the coast lines of moSt of the continents. If they didn't live along the coast, they lived on the banks of the major rivers that poured into the world's oceans.

It appears from the geologic evidence that a major melting of the glaciers and ice caps occurred. This leas to a significant eusraric rise in the level of all seas and oceans. As a result, most of the largest cities and habitations were floodes out and destroyed, forcing inhabitants to move inland. This is well documented in the culture histories and in the geological record.

@Coldo Sorry as geologist and an archaeologist, I respectfully disagree with your rebuttal. The civilizations were not wiped out, which is true. But major disruption dud occur significantly enough to appear in their culture histories. Akso, again there is geological evidence fir a worldwide eusraric sea level change that was severe enough to impact civilizations within the impact zone.

@t1nick Sea level change, is a huge difference from an biblical flood. That's what i was talking about. No major civilisation at that time reported an significant impact on their lifestyle.

@Coldo. Stories get their origination in actual events. Just like Noahs proverbial flood, they get embellished, exaggerated, and modified according to the culture and the impact felt. I am no subscriber to Noah or his displeasure cruise, my point was to show that culture stories are often a reflection of some real event. (E.g. stories surrounding eclipse, volcanic eruptions, earthquakes, etc).

If a culture is at a developmental stage and their entire population disrupted, and their city buried under 100 ft of water, it doesn't matter whether it took two years or two days to effect, this becomes a defining event in their lives. It is often capures as a tale, myth, parable.

@t1nick Agree 100% The main evidence of an flood (as far as i can establish) is in the southern hemisphere.Where Tsunamis, Large volcanic eruptions etc are more common.Myths tend to have some factual basis,but as you say they tend to be exaggerated out of proportion. Atlantis was reputed to be situated in the Atlantic, west of the pillars of Hercules, the straights of Gibraltar in modern terms.Some sort of event undoubtedly happened in the area,whether it not Atlantis was some sort of advanced civilisation has also become an myth.

Oh. When you said Rotten Cruise, I thought you meant Ted Cruz. Either way, they suck.

some people are just never satisfied

I thought this was an advert for the Madagascar movie!

You can include a link to this post in your posts and comments by including the text q:125653
Agnostic does not evaluate or guarantee the accuracy of any content. Read full disclaimer.