Tell me what grammar mistakes get under your skin. I'll go first. I'm driven crazy by folks who use the possessive "your" for the contraction for you are: "you're". Sometimes it's autocorrect, but often it's not. 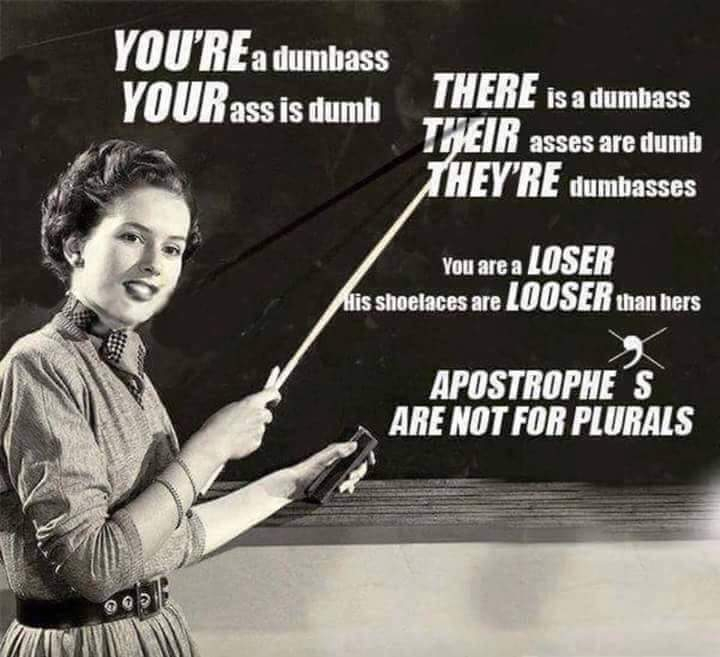 But it's so refreshing to read something intelligent that I wouldn't mind if they used the number 8 to replace 'ate' and 2 instead of 'to'.

People here tend to say "I seen" instead of "I saw".

Yes, everyone here does that. Set instead of sit is nearly as common too.

Yup, the you're/your thing is a thorn in my side as well. I inwardly cringe each time I see the mix up.

Then, there is confusing then and than, or are and our.

And adding an apostrophe in a word to show plural - like cow's, instead of cows. Cow's what !!??

All these too are peeves of mine. I have a friend who makes copious posts on FB and uses the apostrophe before the "s" for pluralization. I have a silly secret pledge to myself I won't comment on any of her posts where she does that, but sadly that really limits my interaction with her. My peeves are a curse, I think!

"Alot." A lot of people make this mistake. It makes them look incredibly stupid.

@Compassion8doubt It's two words, that's the handy rule. Otherwise it looks like 'allot' with a typo.

There are so many, but one of the most egregious that I hear regularly and see in emails is the use of "myself" in place of both "I" and "me."

not grammar but loose instead of lose fcks sake

To wit: "first annual"--no such thing.

Well, I think "first annual" is forward thinking, and shows that it is meant or hoped to be an annual event. But I understand your point.

The 'first annual' anything is the inaugural one.

Its not they're fault there so ignorant..your going to have trouble if you're not reading alot.

On the other hand I'm going to plug the Thai language..if English were this easy, there'd be no reason to teach grammar; no capital letters, punctuation, verb tenses, spaces between words, or even arbitrary left to right writing.

Most sentences involve few words. Instead of children in class saying "Don't block my view," they say, "Yah ban" (stop bulking). Instead of saying, "I don't want to do that!" they say "Mai ow." (no want).

Few, if any, pronouns are used. Instead, people use words that reflect the person's age in relation to the speaker, like "pee" and "nong" (elder and younger) and people use self-identifying reflexive pronouns with each sentence, identifying which gender they are claiming at the moment.

No need to even guess someone's gender, and it's a good thing. I often can't tell, and it doesn't matter.

None, let go of the small things in life

Lol, good answer. No matter how screwed up grammar can get--you usually get the message. Can't tell you how many times my ex corrected my grammar in an argument and I'm like, yeah that's the real issue here. Not the fact that you're playing hide the salami with the bass player at your dad's church and I'm not the bass player. ?

1st one is THERE IS NO FUCKING "T" IN ACROSS...and if I hear "NUCULAR" one more time ...I'M GOING TO GO "NUCLEAR"...oh...and let us not forget "IRREGARDLESS"...it is "REGARDLESS" YOU DUMB ASS MOTHERFUCKING TWATWAFFLES !

The use of "or" as an equivalent. "Or" inside parentheses with acronyms. "Or" used to finish an inclusive list. All very wrong especially in science texts. These are not allowed in legal docs.

The Best Place On Earth (or TBPOE). No "or" needed.

"This medicine can cause heart attack or stroke." Oh! I get a choice? Really?

@Compassion8doubt Exactly my point. Equivalents have to be described as such. Using 'or" in such places is confusing at best.

I could not care less I only care about what you are trying to say. (And it should be 'grammatical',) Sorry only kidding.

People tend to assume this is something that bothers me; in fact, it doesn't - in the majority of cases it's entirely possible to understand what a person is trying to say provided they have a basic grasp of grammar. If someone says "me and her went on holiday" rather than "she and I went on holiday" I know what is meant either way and am far more interested in where they went on holiday and what happened there than how I've been told.

Your and you're
Too and to
It's and its
Who's and whose
'Could care less'
Capitalizing Every Word In A Sentence That Isn't A Headline
U and R
Whole strings of modern hieroglyphics that my phone probably doesn't understand and even if it did I'm sure I wouldn't.

That one is a bad one. The incorrect use of there, their, or they're. English is one mutt of a language and quite complicated at times.

No one is perfect, grammatically or otherwise. Mistakes are bound to be made. What triggers me aren't the mistakes but rather those who are content with mediocrity. In radio, we called it 'lazy mouth'... Things like pronouncing "picture" as "pitcher", and midwestern-isms like "farty", "fark", "harse" for "forty", "fork", and "horse", respectively.

It's usually autocorrect that screws me up. Sometimes I just leave words out completely. Like "I'm buying your bullshit." I left out the NOT. Did that one today.

Mine is the rise of "less' and decline of "fewer". Drives me crazy. Fewer is a number and less is an amount but now so many people, even those educated ones just use less.

Ooooh! Wanton use of the apostrophe gets under my skin eve'ry time!!!

Recursive acronyms bother me: "ATM machine". Or adding to the the obvious to create an overdraw: "hot water heater". It also bothers me when people selectively label cents as singular when there are more than just one cent: "your change is 45 cent".

But unfortunately I just let it go; not creating unnecessary conflict to no benefit.

Depending on the usage ATM machine is not necessarily recursive. ATM is also an old network protocol that was used in Automated Teller Machines early on.

That said, most people are not familiar with the ATM protocol, so would be unlikely to be referring to it.

All of these. When my daughters went off to college, they became serious Grammar snobs, and now - especially when speaking with them - I have become quite careful about split infinitives and dangling participles.

Let me try a link and see if it survives

You can include a link to this post in your posts and comments by including the text q:190013
Agnostic does not evaluate or guarantee the accuracy of any content. Read full disclaimer.