I doubt that kid will ever know what it's like to serve. 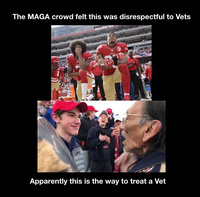 That "kid" is old enough to know better. He's probably a privileged white upper class, catholic high school brat. He should serve ... time in a reform school. That might straighten him out. It would never happen as his parents are the ones who never instilled "right" in him and would get him a high-priced lawyer to keep him from the consequences he deserves.

It's just gotten to the point of shameful. I'm usually an equal opportunity head-shaker, but these MAGA people have stepped off their front porches in Batshit, Crazytown and landed in public. Shameful lot, the whole bunch of them. And shame shame shame on the parents that indoctrinate their children into this hateful movement. ???

Watch the video. The old man is marching into the crowd banging the drum in front of him forcing the kids to get out of the way, until he encountered a kid who wouldn't be intimidated. He could have passed by the kid on the left or on the right, but he chose to stand there banging his drum closer and closer to the kid's face trying to get the kid to move out of his way. His sole intention is to intimidate the kid and make him move out of his way.

Also, listen to the entire 3:44 video. I didn't hear a single "build that wall" from anyone there.

Thank you for that perspective..

It appears the video is not capturing all that occurred. There was also a Native American march the same day with a regularly scheduled annual event to honor Native American vets at Arlington, not some troll going up to Catholic youth in maga hats while beating a drum. Oh, the video shows nothing menacing coming from the old man. [detroitnews.com]

Trump has made select vet hating acceptable. Even McCain suffered lies. Found myself defending him, a man I would never vote for, but who did serve honorably. As a vet, I built up a large profile of Trump's pissing on vets.

You can include a link to this post in your posts and comments by including the text q:269727
Agnostic does not evaluate or guarantee the accuracy of any content. Read full disclaimer.