Many of us that grew up in religion had to unlearn what we had been taught. I came to this later in life but it must have been the right time because it wasn't difficult for me. I think I was lucky with that. What about you? Did you find it difficult to unlearn all your religious beliefs and behaviors or were you ready... open to change? 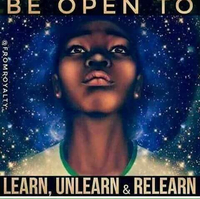 Well when I was religious I was by definition not as open to change as when I left it. However, religion is not without perceived benefits and sure I was resistant to letting go of long-held thought patterns. Particularly since I was preloaded with a bunch of operant conditioning about all the terrible things that would supposedly happen if I ever so much as questioned my beliefs of origin.

It's a bit flip to tell people that if they are resistant to change they aren't "open". It isn't as simple as just deciding to be "open".

I think I demonstrated sufficient "openness" by spending years prying fixed beliefs out of my head with a crowbar. That it took years doesn't mean there was an easier way to go about it.

I wouldn't dare assume to tell anyone that struggles with change that they aren't open. We each define it for ourselves and it takes however long it takes. We all get through it best we can. ?

I was raised that christianity was the default value. We were christian because we weren't jewish or muslim or anything else. So I grew up with the idea that when you died (unless you were a horrible person) you went to heaven. And all those who died before you were there in heaven waiting for you. My mom died when I was 14, and I lost a baby when I was 26. The thought that my baby was in heaven with my mom was very comforting. After baby died I became a really good Xian, well educated for a lay person. I had trouble with the notion of a loving god as I went along, the bible is full of crappy stuff. Years later when I came to the conclusion that religion is bunk I went through a period of mourning for the loss of belief, and it was like losing my mom and my baby again. I know that their atoms are all around, they are part of the universe, but it isn't as comforting.

The learning was effortless. The unlearning took a little work. The relearning almost killed me.

I can see how it can be like that. For me once unlearned, the hard part for me. Relearning was much easier. I wanted to soak up all that new stuff... still do. ?

Started unbelieving in third grade so it's been easy.

That's early, took me quite awhile longer to see the light.

@BeeHappy The important thing is u got there.

I was around religion, we had weddings, Baptisms, communions, confirmations... all the usual Catholic traditions... and I’m not nessasally apposed to tradition. Although many around me were certainly religious I just took it as culture. I never believed any of it was meant to be taken as gospel, lol.. tradition is a way of remembering where you came from but it need not dictate where you’re going.

You can include a link to this post in your posts and comments by including the text q:274016
Agnostic does not evaluate or guarantee the accuracy of any content. Read full disclaimer.