Anyone heard about the Virginian who was protesting in Saudi Arabia and was electrocuted during torture? Administration response equal zilch. Update: The victim is still alive but has been subjected to electrical torture.

Yes, we're much better...we only drown our victims. 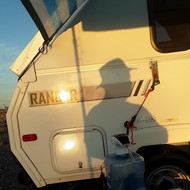 I get your point. I would much rather be electrocuted.

First let me say that almost no one is talking about this.

Second it’s Saudi Arabia and no one should be surprised about anything they or Israel does for that matter.

Third I’d give anything to have a time machine so that I could take most of you back before 2016 and show that every president since FDR has kissed the boots of the Saud family and has never even threatened to cut funding to them.
So trumps not alone in this behavior he’s just doing as all those before him has done.

Oh and by the way I was there for desert shield and storm. I saw first hand what they’re capable of doing to their own people playing music in the streets.

So I wouldn’t expect anything less for an infidel openly protesting their ways. But maybe Americans will learn that we don’t have magical protection powers and stay the fuck out of there.

Thanks but I think we all know that.?

@mooredolezal Yeah I’m positive that most didn’t but you’re welcome just the same. ?

@Larry-new Are you talking about our long time CIA operative Bin Laden’s family? ?
Just said that I won’t live long enough to read the report from when the FBI met with him in May of that year.

Which was shortly after the Chinese shot down a U S Navy recon plane and took the crew captive and declared them to be prisoners of war.
But then released them just before we recieved money from China to invade Iraq? ?

@48thRonin if you don't think we all know about the Saudis then why was your opening remark that what they are doing should not be a surprise? I would also like to hear how you are positive we are so ill-informed about the Saudis. There is nothing there that is not common knowledge. PS I said thanks.

@mooredolezal I don’t know look at how many people believe everything that they’ve been told by the media that they suck up like sponges. Especially about Russia.

And if you feel the need for verification then you can look through all of the post and you’ll see the proof of that. And your welcome is still the same. ??

@48thRonin I don't disagree with that, I'm writing about the people on this site. One third of the people in this country are morons. Remember George Carlin saying "Think about how intelligent the average American is and then realize half of them are more stupid than that". Sorry if I sounded grumpy, it just sounded like an insult to my intelligence. I'm sure that was not your intent.

@mooredolezal No not at all but there’s a lot of people on this site that act like they’re unaware of the truth or that just feed off of what their popular media source feeds them.

@48thRonin I have only found 10 and I just block them. People that won't listen to reason.

@mooredolezal I only blocked the ones who go out of their way to get people kicked off the site because of a difference of opinion.
And those who claim to be of higher intellect but use baby words or purposely misspell the names of people they don’t like.

Just saying that it’s kinda pathetic to see a grown ass person basically refer to someone as a doo doo head instead of using their actual name. ?

@48thRonin I am trying to remember all mine. I know some had a trump like intellect, I think there were four of those, no matter what evidence you offered they insisted they were right. I had one or two racists. I had one guy that would just not stop texting me and would want me to disprove his point in addition to a proving mine. I think the first one, who has lived in Cleveland for over 20 years, insisted that all the women in Ohio were pigs, and everyone in the state was a knuckle-dragging hillbilly because the state voted for Trump and our new governor is a dick head. I guess he was excluded from the rest of the state population. When I told him we had also put Obama in office twice it did not seem to matter.

45 won't say anything, and he won't allow anyone to do anything.
He doesn't want to risk cutting off his money source.

I worked in Rhyiad for a little over a year.... Civilian contractor sent by the DoD at the request of the Saudis. My briefing included a pamphlet listing all the things you would receive a death sentence for committing. Anyone going to Saudi Arabia and not realizing that they are at the mercy of a Medieval and ruthless royal family, and that there is really nothing the US government can do to protect them is an idiot. Anyone doing anything against THEIR laws while there is an even bigger idiot.

Saudi Arabia is beautiful in many ways, but so's a lionfish.

@BufftonBeotch
I like that....
I've found Lionfish in the National preserve down at Akumal. Damn things are all over the Caribbean now. But! Some entrepreneur developed a fantastic way to cook them.

I had a pal in grade school who was sent to Saudi Arabia as her father was an engineer. They lived on a us base. One of her friends on the base was raped by a saudi. That man was caught and publicly beheaded. My friend told me stories of the religious police chasing her for being in a shirt that exposed her elbows. It's an extreme society.

A third of this country is are idiots. That does not mean we should allow them to go to their death by torture on foreign soil, when we have the power to stop it.

"So many great people," as the manic mango would say

I was watching Morning Joe this morning when they were talking about it. Quite interesting. However, I'm not surprised that our Russian president who gets a lot of money from Saudi Arabia won't say a word.

No, I think we are all way beyond being surprised about anything. I made that realization the day he took the two Russians into the Oval Office and gave them information that could have led to the death of an Israeli agent in Syria.

@mooredolezal exactly. We're becoming numb to this which is perhaps the greatest sadness

@Knitfreak I know what you mean but unfortunately for me I still experience the same anger every time he does something. At least until I tell myself this is now the status quo.

@mooredolezal yeah I've spent a hell of a lot of time pissed off for the last two years and then some. I simply don't get it. I don't understand those who support him. I just don't get it. I was watching the news this evening and I simply had to turn it off. I'm watching the A & E mini series Pride and Prejudice on Amazon Prime right now. It's warm and fuzzy. I need a little warm and fuzzy LOL

@mooredolezal intelligence agencies across the globe saw that too . . hopefully they sharing some interesting intel with Mueller

@Knitfreak I feel exactly the same. I keep telling myself not to let him steal years of my life by causing me stress and spending time watching his senseless bullshit. The only time I see him it is on video clips. If he comes on the radio I turn him off. I only discuss him here and only watch him on internet clips on news shows.

@mooredolezal the more i see and learn the more I fear that many in Congress will be implicated. Why else would they cover for him? It's not about the policies. There's many people who could sit in that office and rule women and beat down minorities and the poor. Why him? They're covering for their own complicity.

I wonder how much time to wash this stench off of the presidency??

Our friends in the Middle East!

You can include a link to this post in your posts and comments by including the text q:305120
Agnostic does not evaluate or guarantee the accuracy of any content. Read full disclaimer.