How to recognize a good man 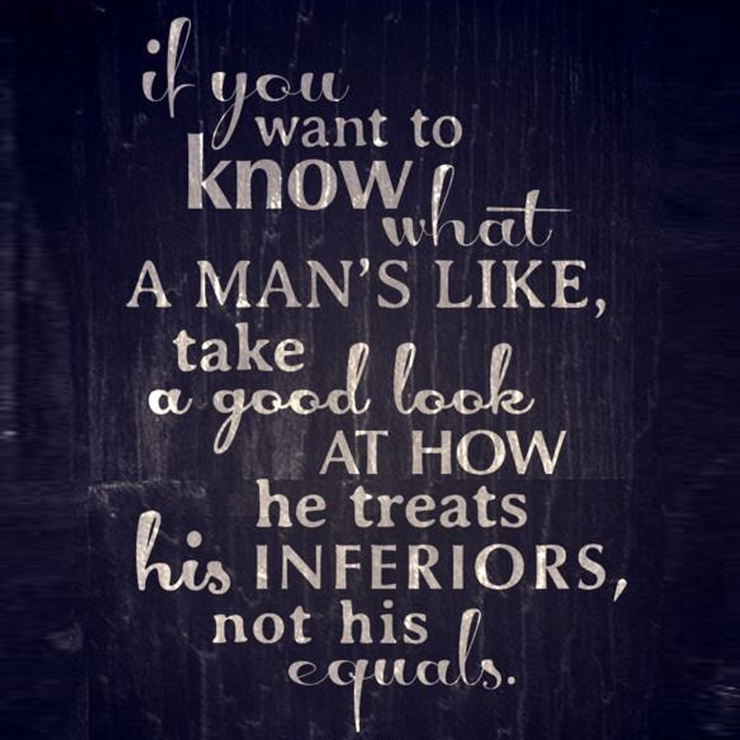 What if the man doesn't feel he has any inferiors?

Exactly. If anyone think they have inferiors that's not good.

Now that raises the whole issue of who are equals, who are inferior and who is superior - a clssic problem

This is quite true. It is called rankism, a form of classism, in which someone mistreats or acts out their prejudices on those who are below them in status. People who work in service industry jobs like waitressing know all about it. In the dating game, both men and women are wise to closely observe how their new dating partners treat wait staff or clerks in stores, etc., because it will eventually be how they will treat you in most cases.

My recently deceased father was someone I had conflict with for most of my adult life. It was ironic that at his visitation and funeral there were so many complimentary things said about him as far as how he treated his law clerks, friends, and legal colleagues, etc. and also how he was so humble, never complained, etc. But I know better as I remember how he not only was as a father, but how he was frequently such a demanding bully to wait staff at restuarants, because there he saw the staff as inferior servants. It was so bad that a few times I actually got up and left the table after apologizing to the staff about his behavior. My mother and siblings felt the same way, but they usually didn't have the guts to confront him or walk out about it. Ever since those incidents, I have always made sure I treated wait staff and other service people well and tipped accordingly.

His case shows how someone can put on a public act and seem like a great guy with their so-called equals, but be a total prick with their perceived inferiors. I've spent plenty of time on both ends of the rankism and classism dynamic and that's why I am so much more aware and sensitive to issues of both isms than most white people. We are all worthy and deserve respect and dignity no matter where we are in the job heirarchy or the economic ladder. Watch out for people in the dating game who are very classist or rankist, because, like my father, they are likely to end up abusive to you as my father was to me, my siblings, and my mother. They will eventually see you as inferior too if you disappoint them very often or stand up to them.

If you want to know the strength of a character, watch for judgemental key words like "inferiors".

In the first place, I think a good man will not consider anyone his inferior. He will know everyone is born equal, it is the environment they are born into, and their physical matter that distinguishes them from one another. Some people are born more unfortunate than others. The good man will want to help lift those people all he can.

You can include a link to this post in your posts and comments by including the text q:366564
Agnostic does not evaluate or guarantee the accuracy of any content. Read full disclaimer.