Intelligent people of the world: this is what we're up against... 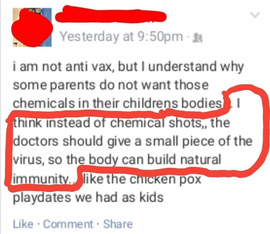 And if the person has children ,more the scary RESULT.
To inform ourselves about vital issues is were the ball is dropped. Our government is leaving gapping holes in
public awareness of crucial technical & medical advances
while allowing big pharma the role of " medicator & chief".
Thanks

OOOOHHHHH dear dawg! I did a chicken pox playdate of sorts... I knew the kid had chicken pox and we went to Thanksgiving dinner at their house anyway. My kids were almost 2, 5, and 9. The 5 year old was sick two weeks later. Two weeks later on Christmas Eve day the grandparents were visiting and we went to the Children's Museum in Seattle (it was packed!), and then to Ivar's for dinner. The oldest say"my belly itches" and I pulled up her shirt to find the first pox. The youngest got up the next morning and looked like she got hit by a truck. Poor little mite was so sick. Then she came down with RSV, then bronchitis, and then pneumonia. She had been scheduled for surgery (ear tubes) in February, but that got kicked back until she recovered. She was sick for nearly 2 months. Would I do that again, OH HELL NO! Chicken pox can wreak all sorts of havoc on children as well as adults. Lets just vaccinate and get avoid them all together. Chicken pox are most contagious the 24 hours before the break out, so can you imagine the number of children and adults we likely exposed? Oy vey. This was 1994, we've learned so much since then.

Chicken pox stays with you all your life...it is what causes Shingles.

@AnneWimsey Yes, I remember my grandmother having a bad bout of shingles. I am sure that is in my future at some point as well. When I worked short term disability claims I had at least two claimants that were out of work for several weeks due to shingles. Nasty stuff.

@HippieChick58 there are excellent protein tive vaccines for shingles now, if over 62 your insurance will pay, too. I got mine from Costco pharmacy, free.

@AnneWimsey I will have to check that out next time I am near a doctor (at least one that I don't work for.) Orrrrrr, I will check with Employee Health to see if they have the vaccines. I did get my flu shot at work, and TB tine test and a few others, no charge to us, it is building herd immunity and we do serve children at risk.

Obviously doesn't know that's what a vaccine actually is.. What a shame...

Omg wtf is wrong with people

Honestly, this person showed some sign of thinking things through in a vacuum of knowledge. S/he clearly has no idea how vaccines work, but understands how they should work. Which is actually pretty heartening considering the clearly befuddled anti science beliefs of some anti vaxxers. Guessing thisbperson has been purposefully uneducated, but that doesnt make them stupid, only ignorant.

And here I was thinking I wouldn't drink till after dinner today.

I'll have one too.

You can include a link to this post in your posts and comments by including the text q:449203
Agnostic does not evaluate or guarantee the accuracy of any content. Read full disclaimer.