Will we EVER know? 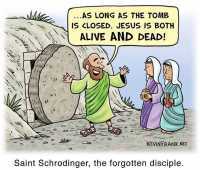 Watching a debate recently with Bart Erhmann, notable authority on Jesus, who believes a historical figure existed but was not divine, explained that he now considers the whole part of the story about burying 'Jesus' in a tomb could not be true. The reason is the Romans would not have allowed it. Crucifixion served as punishment but also to impose fear on the populace, obviously. Bodies crucified were left to literally rot and decompose and collapse on the cross. The rotting remains were then dragged many days later into pits or burnt. If you attempted to take down a body from a cross the Romans would deal with you and not nicely. The idea of a crucified body being allowed to be taken down and buried in a tomb is pure nonsense and contrary to Roman practice, especially for someone charged with sedition against Rome. So, Erhmann believes the whole tomb part of the Christian story is utter fiction.

Personally, I'm a mythicist and don't believe a historical person existed, but a myth or composite of several figures moulded into the Jesus story centuries later. But, even if you do believe in a central non-divine historical figure, like Erhmann, then the whole tomb story as he says cannot have been true. I thought it was, from a historical perspective, a very interesting point.

Here is a blog I wrote about the Jesus Tomb

11Now while they were on their way, some of the guard came into the city and reported to the chief priests all that had happened.

12And when they had assembled with the elders and consulted together, they gave a large sum of money to the soldiers,

13and said, "You are to say, 'His disciples came by night and stole Him away while we were asleep.'

14"And if this should come to the governor's ears, we will win him over and keep you out of trouble."

15And they took the money and did as they had been instructed; and this story was widely spread among the Jews, and is to this day.

Examine the above passage. Do you see the signs of fiction in this passage?

In the Roman world, the penalty for sleeping while on guard duty was death. It is doubtful that even with a "good word" from the High Priest [Matthew 28:14] to the Roman Governor, he would have suspended the death sentence. It is not believable that the guards would have lied and said they were sleeping and subject themselves to the death penalty. Can't spend money if you're dead.
This is evidence that Matthew' gospel is fiction.

We have the witness of the four gospels. But only Matthew's gospel mentions a guard on the tomb. Not even a hint from the other gospels. The guard on the tomb is a vital element of the Jesus resurrection story. Had the guard existed the other gospel writers would have most assuredly mentioned it. To fail to mention such an important aspect of the story would be to miss the point of the story. Jesus was in the tomb, the guard was on duty, the tomb was now empty, so Jesus must have resurrected. The other gospellers didn't mention the guard because this was Matthew's fiction.

Here is another proof from the above passage that Matthew's Gospel is fiction.
The Jewish Priests and Elders tell the guards to say "" 'His disciples came by night and stole Him away while we were asleep."" This is a ridiculous story to tell. Everyone knows that if the guards were asleep they would be unconscious and not know what happened. The ruling Jewish Sanhedrin was 71 members, seventy elders and the High Priest reputed to be amongst the wisest men. It is not believable that these very smart Jews would concoct such a dumb story.

And what about Pontus Pilate. Do you think he would believe this dumb story?

he is dead sure lol

Considering Nazzareth was not founded until the second century CE (AD)
Was it ever a real question?

Except that there was no Jesus.

You can include a link to this post in your posts and comments by including the text q:65779
Agnostic does not evaluate or guarantee the accuracy of any content. Read full disclaimer.