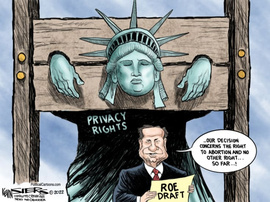 The current Court is the product of a 50-year campaign to push activist right-wing judges up the ladder of the judicial system, to where they have the power to reverse decades of "liberal" decisions. In a profession where 2/3 of the members are politically liberal, they have consciously and deliberately pushed the other 1/3 into high judicial office. And, while liberal judges are ironically quite conservative in their approach to stare decisis, those who have been brought forward by Republican administrations (and the private groups who choose nominees for them) have no qualms about overturning settled law.

And, in answer to the critics who accuse the courts of "inventing rights", I quote the 10th Amendment- "The powers not delegated to the United States by the Constitution, nor prohibited by it to the States, are reserved to the States respectively, or to the people." There is a clear inference that all rights are there in the Constitution; they don't need to be enumerated.

But overturning precedent requires a much stronger rationale than an "I'm in charge now and I disagree".

@Paul4747 . . . all that is 'required' is a majority with new/different interpretation(s).

We have needed the ERA for such a long time.

You can include a link to this post in your posts and comments by including the text q:664611
Agnostic does not evaluate or guarantee the accuracy of any content. Read full disclaimer.