Cooking, baking and eating are three of my favorite things to do. For me, food connects me to memories of places and people. Breadmaking reminds me of my mother and grandmother, because I still use their bowl and bread pans. Certain smells take me back to my childhood.

I would love to hear your story… 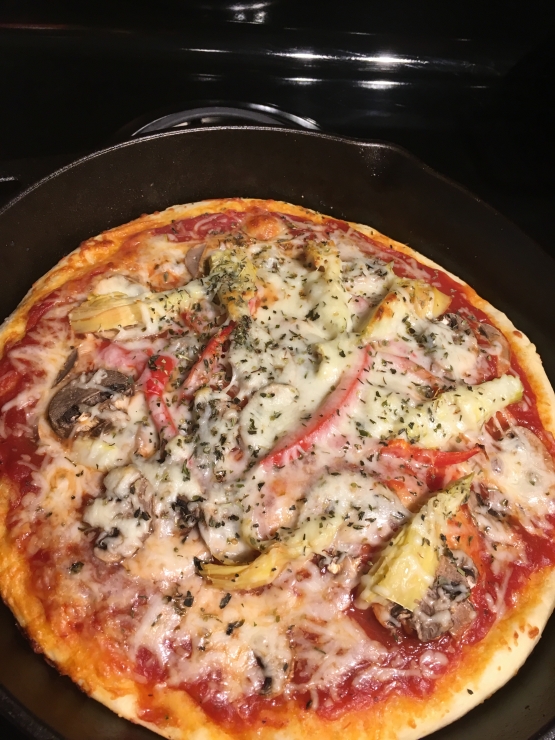 I love sauces, gravies, and smoked meat. I love your pizza. Yummy. I would love to learn candies but I don't want to gain any weight. I specialize in gumbo. It's expensive to make but it's so damn good.

One average large pot of gumbo

In a Large pot:

Its a little play it by ear on this. I just start throwing it all together with no real recipe directions...lol. i think this might be a good start and you can fine tune as you go.

@RoadGoddess. I have a small kitchen but it's just me and the wife and she steps aside. Only because she likes that I cook and clean as I go.lol!

I love to cook. Self taught and can cook pretty much any style. But I only cook from scratch when I cook for people. I hardly ever cook for myself. I enjoy the process but love seeing peoples faces and their appreciation when they are well fed

There is nothing better than the smell of freshly cooked bread

I find recipes In various places ,mostly in the Sunday newspaper and this gives me a chance to cook things I ordinarily would not

Raised by my grandmother... she never knew how to read or write yet, she was famous for her kitchen output... even selling "pasteles" by the dozen during xmas (the most traditional puertorican food now relegated to xmas season), she will do a mean coquito too... and her chicken and rice that my wife learned from her... To me food always been her food... regardless of the wonders found around the world because there is good food all over earth. I noticed my kid sister 3 husbands could cook. But My Biggest Food surprise ever is... The Best Turkey I ever tasted was done my Son on thanksgiving on 2016... moist and perfect directed by phone by his mother... it was epic, I was in tears because it was so good and reminded me of better days among us as a family united then. I am more of an eater but I won't go hungry.

@RoadGoddess Thank You for remind us how important ceremony in our lives food should be.

I love to cook. I make everything from scratch. I never buy processed foods. I make noodles from scratch, pies, cakes and a few gourmet dishes

I can bake very well I once made a cheese took it to work the guys kept asking where I bought it one of the guys that was a friend, never tell them you made it. I just simply used Fanny Farners recipe except I added a 1/2 cup of sugar to the crust and added 2 tablespoons of triple sec. I can also cook have made Julia Childs expert class dishes Beef Bourguignon made it so good my family was licking out the pan. My 6 year old twins won't eat my fancy cooking so I have to resort to PB & J's, noodles, sometimes homemade tater tots. I make a very tasty beef stroganoff no recipe just do it out of my head my daughter will eat that.

@RoadGoddess Mine do from time to time. I think it is a good way to teach them some basic chemistry as well. Got them to help peel potatoes on Turkey day they have fun.

I cook from scratch because I am too cheap to eat out and I want to control what I am eating. I eat quasi vegetarian most of the time. I eat eggs, some dairy, fish. I avoid cheap wheat products and try to stay organic where I can. I grow some of my own foods. I don't bake much anymore. I cook on weekends and freeze portions for lunches during the week, and for breakfasts. Dinner will be whatever is on hand that sounds good. I eat lots of nuts while I am at work, and sometimes at home or while I'm out and about. I try (sometimes better than others) to avoid sugar which is another reason to cook from scratch. And when you cook for one and usually eat alone I don't put a great deal of effort into it. When the kids come over for dinner I will make an effort and then have leftovers for days. Pre-divorce I did more baking and cooking, but I was a stay at home mom, and had time for it.

Clicked off an NPR cooking show today ... think I cussed, too. Thinking (yet again), I eat to live - not live to eat.. When I’m actually hungry, about anything tastes good! So I’ll seek nutritional balance, see what needs eaten first/ finished, and eat. Then head off to whatever I really feel like doing

I learned to cook in grad school--it was either that or fast food every day. I lived in this boarding house with a group of fellow grad students who all got along very well, and we ended up forming a kind of dinner club, spurring us all on to find new and interesting recipes. My chili and Brunswick stew recipes have evolved from that time.

Years later, I moved to various parts of Asia and the Middle East and learned many of the cuisines of the countries we visited or worked in--Korean, Thai, Indian, and Lebanese are among those I learned to do quite well. Since my wife's death, there's no longer much point in preparing a seven-course Indian dinner, for example, but after a few years of culinary "down time," I'm starting to get back into it.

@RoadGoddess I'd be happy to!

My first year away from home it was TV dinners and Pepsi. After that, in the military. After that, I lived with my aunt and Uncle for a summer. My mother was the world's worst housekeeper but a great cook. The military was good and there was plenty of food. My uncle was also a great cook. After that it was learn to cook or go back to junk so I learned to cook. I enjoy it tremendously and am good at it. I trapped (actually in the end it was I that was trapped) two long time partners with my 'Casserula di Pollo alla Veneziana' (Venetian Chicken) dish.

Lucky for me, my late partner, who was Persian, was a superior cook and even had a cooking website. I learned a lot of new dishes. My favorite thing is a glass of wine, some beautiful music and a special dish to make. It becomes even more special if there is someone else who will share it with me.

Since having trouble with my right hand do not cook as often but liked to make my red sauce from scratch-Italian dishes-. I have an old roasting pan -stainless steel that came from my grandmother-use whenever I make a turkey. Unfortunately her old fashioned meat grinder has vanished which she made kreplach and knishes.

You're a cyclist. All cyclists love food!

I just made a ham sammich. Does that count?

You candd include a link to this post in your posts and comments by including the text q:13428
Agnostic does not evaluate or guarantee the accuracy of any content. Read full disclaimer.