Sooooo the earth is flat now? Not round any more? Never cared much to debate this topic but I've always been curious as to what people thought and why. 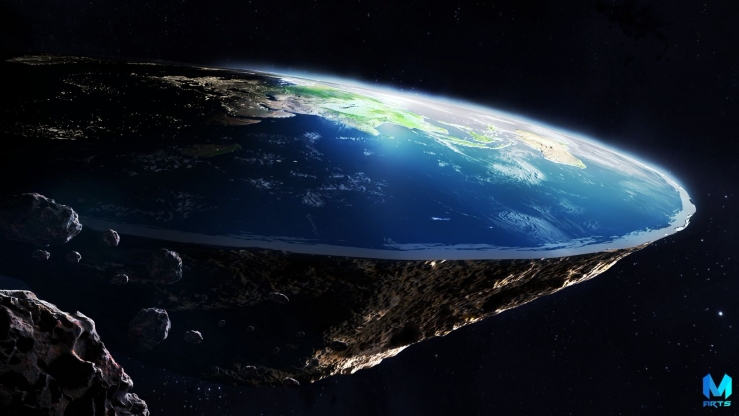 I can prove the earth is NOT flat. I am owned by cats. We're still alive and well on the planet. If the earth were flat the cats would have knocked us all off the edge by now.

ANSWER Water is NEVER flat because..........
Water has mass and is attracted by gravity centred at the dead centre of the globe . As the globe curves away, so also gravity pulls equally on the water from a different angle which means that the water has acquired a curve equal to the radius of curvature of the earth. The seas are all convex ..Strictly speaking there is no perfectly flat water on our planet.

STATEMENT FROM THE FLAT EARTH BOOK.
As aircraft have no need to change their altitude settings once set on world flights, the earth must be flat.

The gravitational lines of force in a spherical body like the earth, splay out from the core to all points of the circumference, so no matter from where you are situated, the force will always be directly below you. And as you move around the globe, a new point of gravitational reference will be established. Thus a bubble level will stay centralised while at a set altitude no matter from where you are positioned around the earth.

Also the flat earth proponent questions that the plane flies straight ahead so it must be a flat earth.
An aircraft DOES NOT FLY STRAIGHT AHEAD but positions itself to aim directly at the HORIZON. thus the aircraft stays parallel to the earths surface which is curving away at exactly the same rate as the aircraft is descending. making it unnecessary for the aircraft to keep resetting it's chosen altitude.

Round - duh. If you have ever been on a commercial plane on a clear day, you can literally see the curvature of the earth.

Of course this may be an optical illusion created by god to test our faith... It isn't. Even the catholic church admitted it in 1992, 350 years after they locked Galileo up for saying the earth wasn't the center of the universe. See, if they speak the word of god and god is wrong, what would make anyone with critical thinking ability to literally believe the bible and all of its contradictory BS?? I can see hundreds of years ago but now with unprecedented access to knowledge?

Catholics, screwing up the earth for centuries.

people have been around the world and been in planes, space and stuff. all atoms including us are made of atoms and if there wasn't magnetism literally holding us together everything would be atoms. when rocks in space get above a certain size they become round because of the immense pressure pushing on them from everywhere.

It might have been some sort of control factor. If you try to go you will fall off the side.

I think they should just put it to a vote and be done with it.

Obviously flat. Huge conspiracy this whole time. You know that evolution is a hoax too, right?

You can include a link to this post in your posts and comments by including the text q:15303
Agnostic does not evaluate or guarantee the accuracy of any content. Read full disclaimer.