Anyone believe in luck?

I make a habit of only believing what is proven scientifically or what I have to to pragmatically navigate reality and nothing more, which is why I don't believe in God. I don't believe in some universal force of luck either (apart from luck in terms of probability), but I do have many anecdotes where it seems I do the exact same thing as others but end up worse for the wear. It feels like I put a lot of effort into things that don't work out, no matter how much focus or effort I put into it, no matter how optimistic I am, or how often I try. But I'm told by other people that it's easy, or I see them do it easily, and they look like they are doing exactly what I was doing and it just works for them. Anyone else have experiences like this or want to discuss their thoughts on luck?

I don't believe in luck as a force "out there" acting on my life, but I just think there are a lot of random influences on how events play out that we don't have control over. We don't have control over the family or society or financial milieu that we are born into, the weather, or a ton of other things. We only have partial control over things like our health, or our relationships and how those add or subtract from our efforts. Worst, to my mind, is that we don't have much control over other's perceptions, snap judgments or aggressive actions against us. So yes, there's an element of luck -- "good" and "bad" -- that enters into everything we do. Hopefully we have ENOUGH control to overcome those random influences and meaningfully influence the course of our existence.

It is not a matter of believing in luck, luck is an integral part of life. Call it what you will, a rose by any other name is still a rose. In My Humble Opinion

Not luck, but circumstance and odds.

circumstance and odds was simply too long... so we are lucky they chose "luck" for short.

@GipsyOfNewSpain I get what you mean, but luck is traditionally defined as a supernatural force that influences an outcome.

@jayneonacobb I had made some basketball shots that were pure luck... I didn't even expected them to go in... but I got you... there will always be those with technicality about everything. I had gotten laid on moments that were not supposed to happen... they say luck is when preparation meets opportunity... that is good enough for me.

Based on my lottery tickets over the years, my answer would have to be in the negative. :-<

I do not believe in luck. I believe in random chance. OK you buy a lottery ticket and win, yay = good luck, you were lucky.
I resent being told I am lucky. I have been told I am lucky to have well behaved kids, lucky to save my company from liquidation and such.
yeah right.
Can you make your own luck? Maybe?
Louis Pasteur said "Chance favours the prepared mind" not those exact words maybe as it wouldn't have been in English.
I try to be in a position to take advantage of opportunities, always have access to a little bit of cash in case I find something at a ridiculously low price, when I am out on the beach or in the bush I always have containers in the car in case I find something interesting. I also carry a pillow case and plastic boxes in case I see an animal hit by a car, my car has a very large first aid kit.
Black cats? I don't know, don't walk under a ladder is good advice and workplace safety.
An old Chinese saying that it is lucky if a bird shits on your hat is so very true.
Think about it, how lucky was it that you were wearing a hat.

No. I think things just happen by chance.

Here's another way to think about luck. Statistically your chances of winning on one roll of a single die are considerably better than one pull on a slot machine. The odds for the die are 1 in 6, whereas the odds on an average slot machine are about 1 in 262,144 with a three reel machine with single stops. The odds can only get worse from there. So, it's obvious that there is more luck built into the die than in the slot. In other words, there is no such thing as luck no matter how one decides to view it. Life truly is a crap shoot and often the shot comes up crap.

I believe in luck in that I make it. We contribute to creating our own realities.

“I regard consciousness as fundamental and matter as derivative from consciousness." – Max Planck, theoretical physicist who originated quantum theory, 1918 Nobel Prize in Physics

When I was growing up in Haiti, my friends called me a witch, and stopped letting me play games with them because no matter who cut the cards, I got a royal flush, my dice always landed double sixes, and even Chutes and Ladders had me winning. I tried, but couldn't lose, and my friends were angry, so I gave up playing games.

If something has a low probability of happening I'll say it's luck if it keeps me from needing to make a long explanation about statistics and probabilities. I don't need to believe in luck, I'm too lazy.

Some lucky bastard won the lottery.

BTW: Great album, Tommy the Cat is my fav.

I had been a Lucky Motherfucker all my life... regardless of those that don't believe in luck think.

Standard saying in the Army (and most others) aviation community was "It's better to be lucky than good".....

I farm, if I believed in luck I'm sure it would be all bad.

Good fortune can can happen to anyone but I believe the adage that harder you train/work the 'luckier' you get. Nice to here some Primus again, really love 'Winona's big brown beaver'

I sometimes use the term, but I usually mean "chance" or "good fortune" rather than luck. I don't understand how anyone can think there's such thing as good/bad luck.

To me, it is a valid word to describe that weird coincidence where everything good happens at just the right time -- for example: When I win the lottery, I'll consider myself to be pretty damn lucky! But, not in a supernatural way.

Some people do seem to always fall on their feet.

Life is chaos. So, yes. I believe in luck. Both good, and bad. 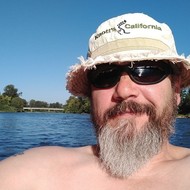 With my luck, when my ship comes in I'll be at the airport.

Just because it can't be explained doesn't mean it's not real. Lots of knowledge today was considered false in the past. Some people do have good things more than others. I have had bad things happen but, in the end, they actually turned into good things. So much luck has come my way I feel I could write a book.

luck noun 1. success or failure apparently brought by chance rather than through one's own actions. - Google Dictionary

You can include a link to this post in your posts and comments by including the text q:23982
Agnostic does not evaluate or guarantee the accuracy of any content. Read full disclaimer.