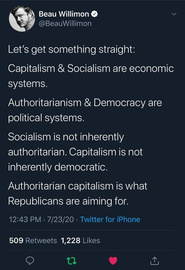 Thanks for posting this. I've thought for a long time that it's hard to find a toe-hold in this or other forums to discuss some of the issues here.

I'm more or less coming at this from an advocate-of-capitalism point of view, but I think it's crystal clear the last few years (and decades, in some respects) have been characterized by many such advocates predictably cherry-picking "laissez-faire" capitalism and free markets to mean "do what you want, and the left-wingers just want a pretext to make slaves of all of us". For what little it's worth, I differ with those folks. As I see it, there is a role for a strong but non-authoritarian government in a capitalistic system. When property rights are violated (up to and including deadly wanton exploitation of unpaid-for externalities, and including when consumers are taken advantage of by businesses flouting contractual obligations or flouting the impossibility of mastering fine print in some situations) the proper role of a government in the system is to step in and cut it out. Instead, the advocates of "authoritarian capitalism", or some such, by and large ignore such a government responsibility, but seem to see a role for a strong government in a more traditional fascist sense, such as in using force to curb internal dissent, to curb immigration, and such as in enforcing crony favoritism toward big businesses.

Without a properly functioning government that does protect consumer rights and does identify exploited environmental externalities and curb them, a capitalist system cannot possibly function in my view. On environmental matters, and particularly with respect to the climate emergency, I think some smart (doesn't always have to cost a zillion dollars) government intervention within our capitalist system is the best way to undo the sense that the "Tragedy of the commons" is an insurmountable problem. The lack of appropriate intervention (the failure to protect property rights) is a real betrayal of capitalistic system principles, in my view, and so in my view, the very folks who claim they are defending free markets and capitalism (the republicans), certainly are not. One particular thing I'd like to see in the Budget (I'm not sure any more if it's there or not) is a serious attempt at raising funds by a pollution penalty system (so-called carbon taxes and related), probably along with a proper attempt at a bounty/reward system for cleanup.

I do think much of what the left is advocating is a form of socialism, and I do think it inherently requires, by some definitions, some degree of authoritarianism. For what little it's worth, I'm glad to see the centrist democrats pushing back on some major points (I'm a Sinema voter and will do so again, so far).

Whether or not I am correct about the "inherent" requirement, and even though my leaning toward democrats has been a "lesser of evils" choice for the last two decades (that I don't regret one bit), I've come to see an argument for some social programs being best done if they involve the government..... or, at least, the argument for direct government involvement in some areas is strengthened if the government is not going at least to do its job and enforce consumer contract rights, and property rights.

Anyway, up until November 2020, those of us (left and right and others alike) who were not seduced by the authoritarian pseudo-freedom-defending nonsense of the Republicans gathered under a big tent and did what we had to do to stave off disaster, but now that the dust has settled on that (including the ongoing attempt, in broad daylight, by the former President/would-be dictator, to end the rule of law and take over our government ), it behooves us to have some awareness that we are far from out of the woods. With the intellectual bankruptcy pervading so many minds in the US on so many points, including definitions of different government systems, and including in our philosophic considerations, we are in a very bad spot. In my view, a way to get out of the woods is to continue the sorts of conversations that can take place using such toe-holds as we can find.

Republicans are aiming to prevent the USA from going down that path of disaster.

"Community as a whole" does not necessarily mean politicians. It can mean control by the people who work at the factory or whatever. And socialism is not the same as democratic socialism, which is working very well in Scandinavian countries.

@JonnaBononna Beau Williamson was speaking of Socialism where it is an economic system. In that context, here is the definition of socialism:

Can you give one example of where Socialism was implemented where the factory workers were given control rather than the politicians?

Here are the countries that have implemented Socialism as an economic system:

It's extremely difficult to find any example of wealth and prosperity anywhere in the entire list.

@BD66 there is NO ONE in this country trying to implement socialism here. We don't even have a liberal party in the US. The current democratic party is the same as the republican party was in the 1950s and 60s. Biden is basically Eisenhower. You should stop listening to right wing pundits.

@JonnaBononna Really? Have you forgotten about the love affair many Democrats have with Bernie Sanders? The man who took his honeymoon in the Union of Soviet Socialist Republics. When he came back from the USSR and praised them? When he praised the Castro brothers in Cuba?

@BD66 I hate how you dishonest conservative fuckers keep bringing up Bernie as some straw man argument against socialism. Like the OP, JB stated, the US has no viable socialist party going. And Bernie and even The Squad, have no power whatsoever in the Dem Party or the fed govt., as they are overwhelmingly outnumbered by centrist, neoliberal corporate Dems. They are merely given attention for show and to keep the Dem base safely sheepdogged inside the party instead of leaving for a real socialist or progressive party. And you damn well know it, but you keep making these phony bullshit arguments as if Bernie and the other progressives actually had real power in DC, like Manchin and Sismea have.

Quit your fucking lying, you dishonest fuck. You are fooling no one who is actually informed and intelligent here on Agnostic, just spreading the misinformation for you and your conservative pals. Your gratuitous red-baiting is also very tired and outdated. Maybe we should return the favor and properly lump you in with Pinochet, Franco, Hitler and other right wing authoritarians that you favor, as you are in favor of freedom only for the rich and white supremecists such as yourself. There is nothing patriotic in your support for right wing authoritarianism. You'll never be rich, I bet, but you will always be the latter, a white supremicist, if you support authoritarians.

@TomMcGiverin You lefties continually bring up Hitler. You do realize that Hitler changed the name of the German Workers Party to the National Socialist German Workers' Party. Hitler was a Socialist. He controlled the the means of production, distribution, and exchange, literally the definition of Socialism.

@BD66 Fuck off. You still refuse to admit how right I am about at least the rest of my comment about you. Time to block, asshole...

You wrote: "....The Scandinavian countries are capitalist countries....."

I haven't studied it closely, but my understanding is they are a mixed bag, neither fully free market nor fully socialist. Some of this can be seen here:

So for example, here are some of the socialist aspects:

"....Overview and aspects
The Nordic model has been characterized as follows:[23]
An elaborate social safety net, in addition to public services such as free education and universal healthcare[23] in a largely tax-funded system.[24]
[....]"

On the other hand, here are capitalist aspects:
"....Economic system
The Nordic model is underpinned by a mixed-market capitalist economic system that features high degrees of private ownership,[...."

I don't think it's accurate to paint with a broad brush and simply claim they are capitalist. There is more to it than that.

@kmaz This is the definition of Socialism:

The Scandinavian countries have publicly traded corporations, so the means of production, distribution, and exchange, are privately held.

They do have social safety nets, just like the rest of Western Europe and North America, however they are not Socialist countries where the means of production are controlled by the government like they are/were in these countries:

Sums it up nicely!

Well said, but there’s no mention of fascism, which lies at the intersection of capitalism and authoritarianism. Fascism, and its populist right wing hit squad adherents, are where we seem to be headed in recent years. Fascism is the unspoken illness here!

Fascism is a form of authoritarianism.

@JonnaBononna Agreed, but we need to identify what the Republicans are devolving into. Watching Trump rallies and hearing his speech and that of many of his followers is like stepping into a time machine and going back to 1930s fascist Germany. Trump is a fascist and we need to recognize this.

I’ll be sharing that. It’s beyond astounding how many of our Media dimwits can’t make this clear.

You can include a link to this post in your posts and comments by including the text q:625398
Agnostic does not evaluate or guarantee the accuracy of any content. Read full disclaimer.