We rely on members to let us know when posts contain content that violiate the community guidelines. The most common reason that content gets flagged is that it contains dehumanizing or trolling/baiting text. Getting too many flagged posts will result in account termination.
Visit Group Join Group
4 13

Looks like cats are having more of an environmental impact than I’d realized.

Poland declares that household cats are now an invasive species

Cat lovers may not like this news: The Polish Academy of Sciences in Poland has declared that cats are dangerous, adding them to its list of “invasive alien species.” The institute isn’t alone: In some Icelandic towns, household cats have a curfew.

There is some damning evidence on why cats should stay inside. In the U.S. alone, housecats kill more than 2 billion birds each year, adding to the extinction of 63 different species. It’s this reason that makes cats a problem for the ecosystem, says Laura Helmuth, editor-in-chief at Scientific American.

A number of studies have documented the effect household cats have on outdoor animals.

“A lot of [studies] show that much of the hunting that cats do is just invisible to us, invisible to their owners,” Helmuth says.

In one study, Helmuth put small video cameras on cats and followed what they did over most of a summer. She found the cats killed a lot of species in their neighborhood. Only 20% of the time would they bring their catch back home, leading many owners to believe their cats weren't causing trouble.

More than 100 years ago, the Lyall’s wren was entirely wiped out by a cat named Tibbles in 1894. Helmuth says cats have that kind of impact because birds and other species have never experienced these predators in their evolutionary history.

A lot of species also make their nests on the ground, making them easy targets for cats to attack and eat chicks or adult birds.

“If you throw a cat a ball of yarn, they pounce,” Helmuth says. “They kill anything that catches their eye. And so it's able to go through a nesting colony of birds and just kill every single one it sees without slowing down.”

While Poland and Iceland are taking steps to encourage owners to keep their cats indoors, Helmuth says awareness about the issue is growing in the U.S. For cat owners that may say their pet is happier outdoors, Helmuth lists a few reasons why they should stay inside: Outdoor cats die at a much younger age, get hit by cars, fight other cats and can contract diseases.

“I think a lot of it really needs to be kind of a cultural change,” she says, “where people understand the impact of their cat, and that keeping it indoors is something that every cat owner can do as part of their effort to make the environment safer and better for everybody.” 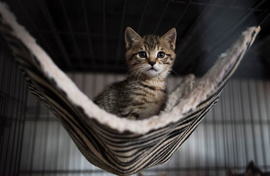 Climate change and habitat destruction are main causes of extinction but Irresponsible pet ownership is no joke.

There are some simple and effective solutions to help minimize the harm domesticated cats pose to local wildlife. Spaying or neutering the pets helps keep the cat population under control. Keeping cats indoors will prevent them from preying on birds and other small animals in the area.

Ironically, one of the hazards some cats face in the wild comes from another invasive species. In Florida, non-native Burmese pythons, bred as exotic pets, got loose and multiplied in the Everglades; their population grew rapidly in the wake of Hurricane Andrew in 1992. Today, they number in the tens or even hundreds of thousands, and Burmese pythons are encroaching into suburban areas — where domesticated cats make easy prey.

Irresponsible people are the problem, not cats.

The cats that people do not own will do what they do. They are going to eat and breed and keep it going. They do what we allow them to do.

Here in Victoria Australia a 1994 law stipulates that domestic cats are not allowed outside after dark and representation is currently happening to only allow them outside in caged areas such is the damage caused by them.
The legislation on domestic animals runs to some 289 pages.
Here is the first section:
Domestic Animals Act 1994

No. 81 of 1994
Authorised Version incorporating amendments as at
1 July 2019
The Parliament of Victoria enacts as follows:
Part 1—Preliminary
1 Purpose
The purpose of this Act is to promote animal
welfare, the responsible ownership of dogs and
cats and the protection of the environment by
providing for—
( a) a scheme to protect the community and the
environment from feral and nuisance dogs
and cats; and
( b) a registration and identification scheme for
dogs and cats which recognises and
promotes responsible ownership; and
( c) the identification and control of dangerous
dogs, menacing dogs and restricted breed
dogs; and
( d) a registration scheme for domestic animal
businesses which promotes the maintenance
of standards of those businesses; and
( da) the regulation of matters relating to the
breeding and sale of dogs and cats; and(db) the registration of foster carers for certain
purposes; and
( e) matters related to the boarding of dogs and
cats; and
(ea) the regulation of the permanent identification
of dogs, cats, horses and other animals; and
( f) payments to the Treasurer from fees received
by Councils under this Act; and
( g) other related matters.

Consequently cats have to be microchipped & an annual fee paid to the local council.

And news of a local council imposed 24 hour curfew.

This is why my cats are indoors only.

They don't get in fights, get sick, have fewer or zero parasites, and don't kill wildlife.

I have had cats that liked going for walks with a leash and harness.

@MizJ @Lilac-JadeCanada When I was growing up we thought I was allergic to the cats. It turns out I'm allergic to the weed pollens they carry in on their fur. My indoor cats never bother my allergies.

My cats have always been indoors, with occasional forays into a fenced backyard under supervision. As stated by @MizJ , not only is it better for the cats (whether they're totally happy about it or not) but it is beneficial for the local wildlife & hence the whole local ecosystem.

The feral "problem", that is endemic in my County, needs a major catch/fix/release program to start controlling that population to avoid major culling operations or outbreaks of things like rabies, which could set off such an operation.

I've loved my cats (& dogs), do not want to see them proscribed & want to continue to benefit from the companionship, love & benefit of interacting with other species in an intimate way. They have always been family & I want the best for my family.

@phxbillcee I used to help care for a feral colony. The cats would have a small piece of the top of their ear cut off after the trap-neuter-release. I ended up adopting a couple of the kittens and an adult male that loved people.

The only issue with feral colonies is that animals appear due to awful people no longer wanting them.

Posted by snytiger6God is a cat...

Posted by snytiger6A burglar broke into our house last night...

Posted by KilltheskyfairyIt’s one of my favorite forms of therapy!

Posted by KilltheskyfairyThe struggle is real…

Posted by KilltheskyfairyThe struggle is real…

Posted by snytiger6Kitty found my slipper and now...