After having recently backed President Trump during a call to state governors, the Pentagon is now increasingly distancing itself from his threats to mobilize troops and tanks against American citizens protesting the police murder of George Floyd.

Well, if you remember, Trump did boast about how he could "stand in the middle of 5th Avenue and shoot somebody" and still not lose a single voter. I guess he’s finally decided to test that theory - with a tank.

Ever notice how Trump’s first reaction is always the worst? Of course, his second and third reactions aren’t much better either. Hell, why bother with tanks, when you’ve got all those missiles? Gotta one-up Tiananmen Square - after all.

Meanwhile, the Daily Beast reports that a senior administration official countered that this doesn’t necessarily mean that Trump actually wants to send in tanks, “I think it’s just one of the military words he knows.” 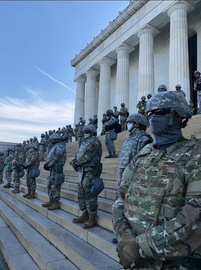 I can only imagine the effort being made by his political advisers to get him to just shut up.

I think he is shaking his fanbase to the roots.

We are living a Nightmare .

Asshole would do it

Yes he would, he wants a civil war.