Televangelist Jeffress Says Democrats Plan to Bring Out the Guillotines

During an interview with Lou Dobbs on the FOX Business Channel, Trump supporter and Megachurch Pastor Robert Jeffress, was invited on the show to discuss the “Defund the Police” movement and, after condemning that, told Dobbs that if Republicans lose the presidency in November, Democrats will bring out the guillotines and cut off the heads of all their critics.

Well, on a positive note - it isn’t like he’s actually using that head for anything anyway. Besides, my guess is - if someone like Jeffress ever were to be beheaded, it’d probably boost his IQ by at least 20 points or so.

Of course, evangelicals have been warning their cults about progressives taking away their guns, confiscating and burning their Bibles, and Christians being tortured and killed if Republicans aren’t elected - for many years now.

Now, if memory serves me correct, we’ve recently had eight years of both Bill Clinton and Barack Obama, and to my knowledge, no Bibles or guns were confiscated and no one was beheaded. Oh sure, there’ve been a few incidences of “atomic wedgies,” but no beheadings. 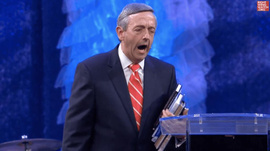 We can only hope .

Have I mentioned lately my DIY Build Your Own Guillotine Kit? All plans & hardware included! Just pick up the wood and blade material at any Home Depot,. Easy assembly, French peasants did it with hand tools! Just $99....for an additional $29.95, make it mobile! Make all new friends wherever you go with your trusty machine, your lawn, the Town Green, the WH lawn! Call now for quick discreet delivery!

Just go to the local farm store and get a large axe. If you do not want to do the deed your self drill a hole in the handle and use this as a pivot point, experiment until it works and your set.

@dalefvictor even more portable, but probably my arms would wear out & the splashing blood would draw a lotta flies......

@AnneWimsey No matter how it is done it is going to be messy. We are going to need protective clothing for sure.

Well, I got mine sharpened up real goood..